As Halloween approaches, bat-themed decorations swarm store windows and homes, often in the company of black cats and other creatures synonymous with mystery and dread. Though bats have become symbolic of our spookiest holiday, they are benevolent, diverse, and fascinating throughout the year. 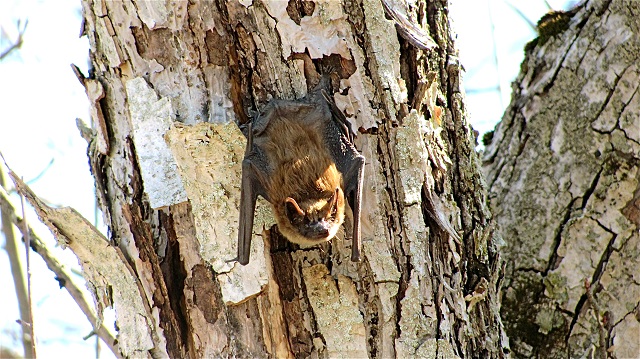 One out of every five mammal species on earth is a bat. They may look like flying mice, but bats are more closely related to the carnivores and hoofed animals. They are the only mammals capable of true flight, and their wings consist of four elongated fingers with skin stretched between them.

Nine species live in Massachusetts. All eat insects and hunt mainly from dusk to dawn. To find prey in low light, they make high-pitched sounds that bounce off their surroundings and return to their ears. By analyzing the way these sounds echo off of insects, they can discover their target’s size, location, and direction of travel. A single bat can eat 600 moths and other insects in an hour.

Since prey is scarce in the winter, Massachusetts bats migrate south or hibernate. Five species overwinter in cold wet caves. In recent years these habitats have hosted a fungus—probably introduced from Europe—that causes a deadly illness called white-nose syndrome. As a result, these five cave-dwelling bats are listed as endangered in Massachusetts.

Scientists have successfully treated some bats for the disease. But there’s much more work to do. Help protect bats by making sure that you don’t disturb their summer and winter roosts. Also, support the conservation of natural areas that keep insect populations in balance, allowing bats to continue flying our skies during the witching hour and beyond.

Learn more about bats at massaudubon.org/bats.

2 thoughts on “Bats: Legions of the Night”