Every banding season seems to have its memorable moments.  This year’s fall migration was marked by a tropical storm called Jose. 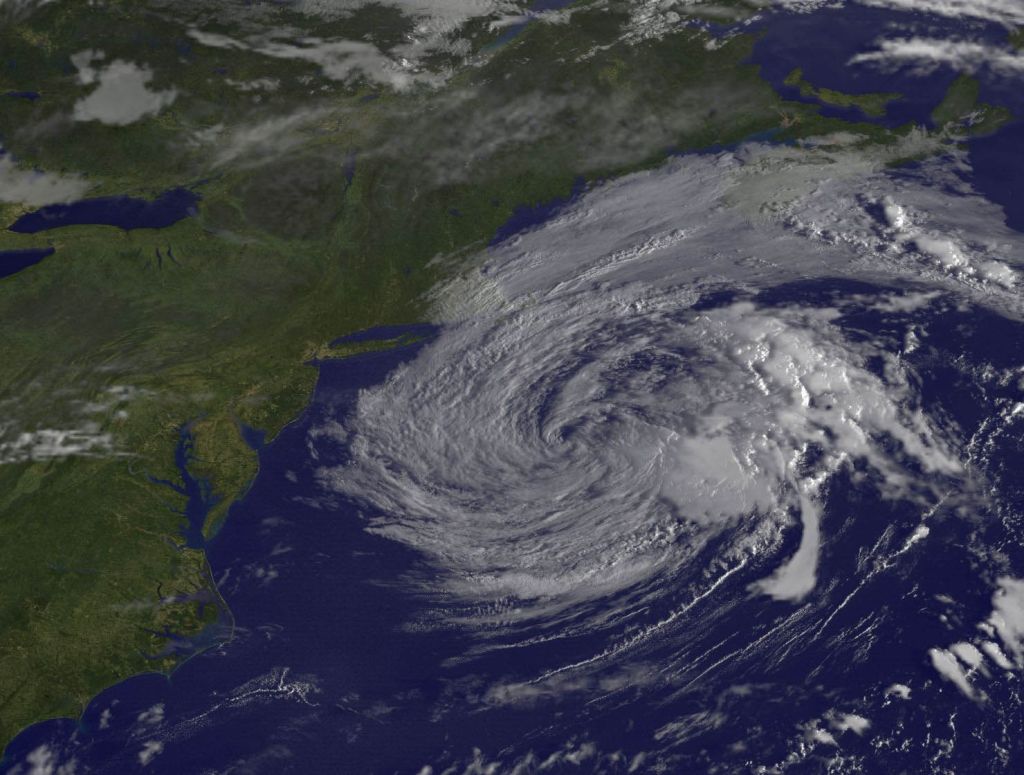 Jose’s winds did a lot of crazy things with birds. Perhaps most significant was the extremely rare Masked Booby that was blown in to LeCount Hollow Beach in Wellfleet. 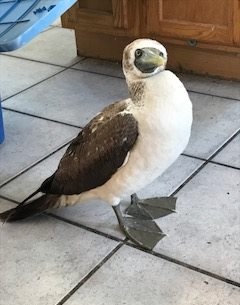 This Masked Booby was found after Jose on Wellfleet’s ocean side, the first of its species recorded on Massachusetts soil. (courtesy of Wild Care)

Late summer and fall featured a lot of tropical storm activity in the Atlantic Ocean, with the month of October being 40 % more active than usual, according to the National Weather Service.

This probably helps explain the young Orange-crowned Warbler banded here on October 13th. The bird, of course, was heading south. But six days later, we got word it had been recaptured by banders in the opposite direction—Nova Scotia! 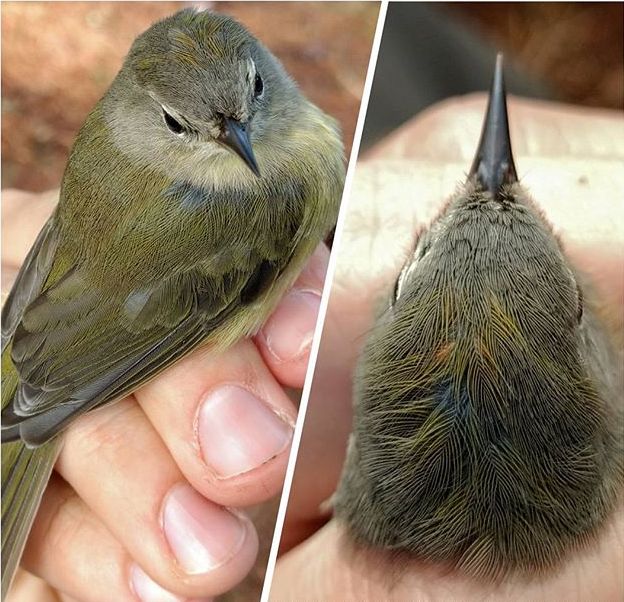 This is not the “wrong way warbler” that ended up in Canada. But the photo to the right by Frankie Tousley shows where the Orange-crowned Warbler gets its name. The orange part is not very visible until the bird gets excited and raises its feathers.

It’s an example of what’s known as reverse migration,  a sort of boomerang effect which can be caused by storms and weather fronts churning the atmosphere, confusing migrants, and tossing them back from whence they came.

Each fall gives brings some news on who appears to have had a good breeding year. This not only included all the young Orange-crowned Warblers and Palm Warblers, but also the first ever Cape May Warblers  banded at our Wellfleet station. The spike in Cape Mays may have been due to a big outbreak of spruce budworm in the boreal forest. Lots of food can mean good chick survival and higher fledging rates– possibly the only positive result of this destructive insect. 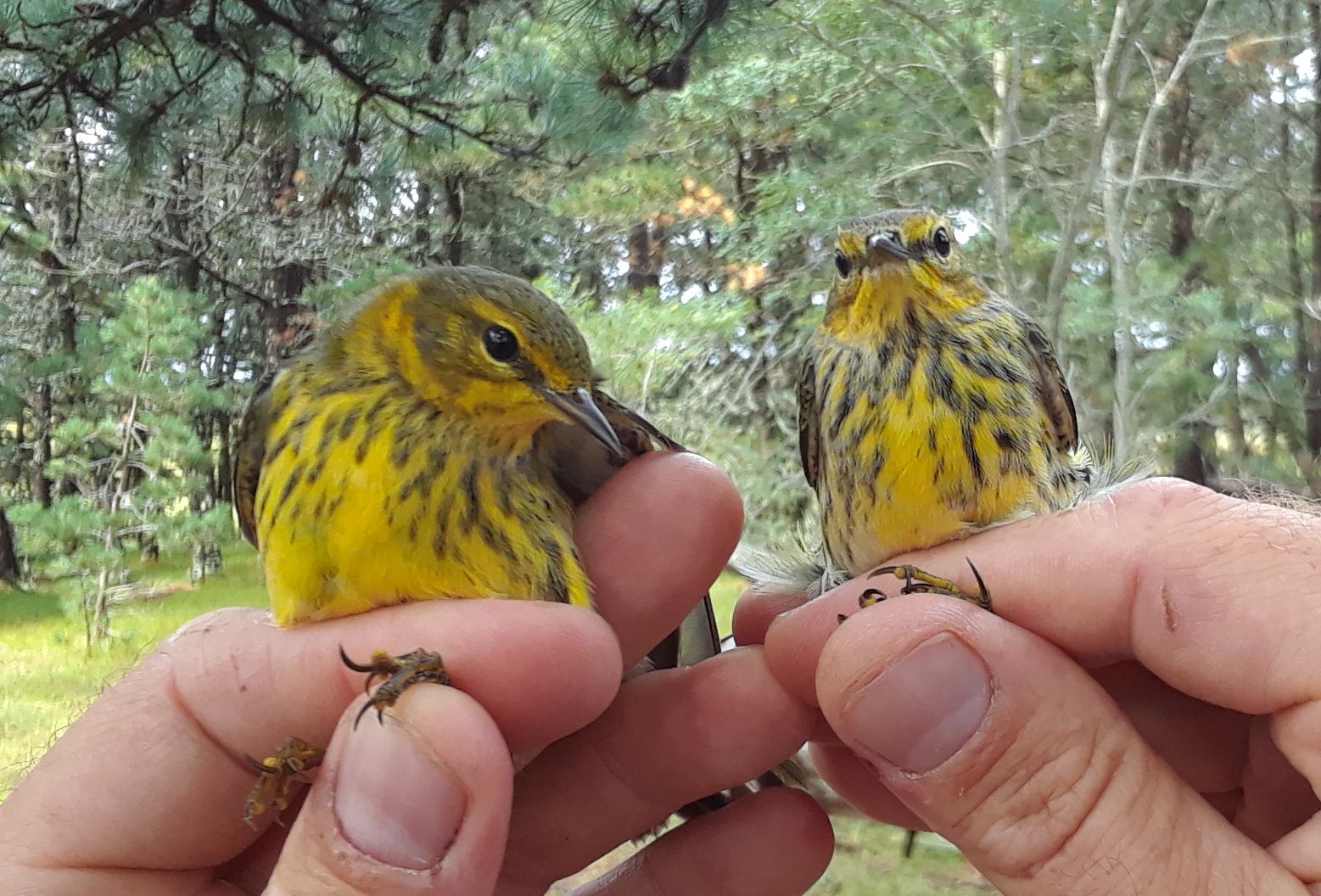 Cape May Warblers do their best to keep spruce budworms in check. Because they lay more eggs than other warblers, they may do extra well in big budworm outbreak years. (photo by James Junda).

Each season seems to turn up something odd. Such as these chickadees, two of which had some extra white feathers. 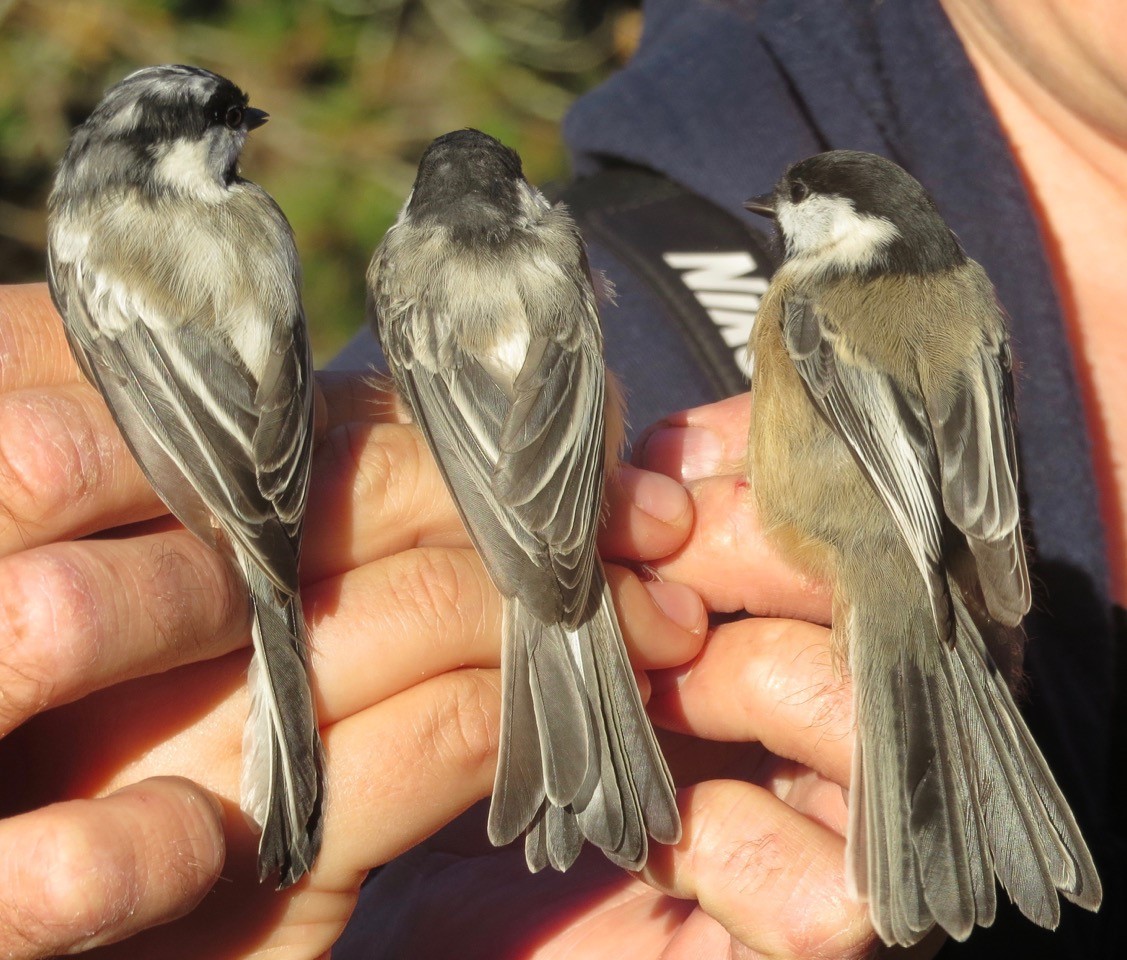 What’s up with the white feathers on the two birds on the left? Hopefully, they’ll live to undergo a complete normal molt next fall. Maybe we’ll even capture them again! (photo by Jeannette Bragger)

Sometimes white plumage is the result of a genetic mutation. These birds had their normal gray juvenile feathers (we know because the birds didn’t replace them). So, it suggests some sort of fungal or stress condition. If they survive until next fall (and having extra white feathers could make it harder), these chickadees should molt back into normal gray, black and white feathers.

Toward the end of the banding season, we were lucky to catch several of these great birds: 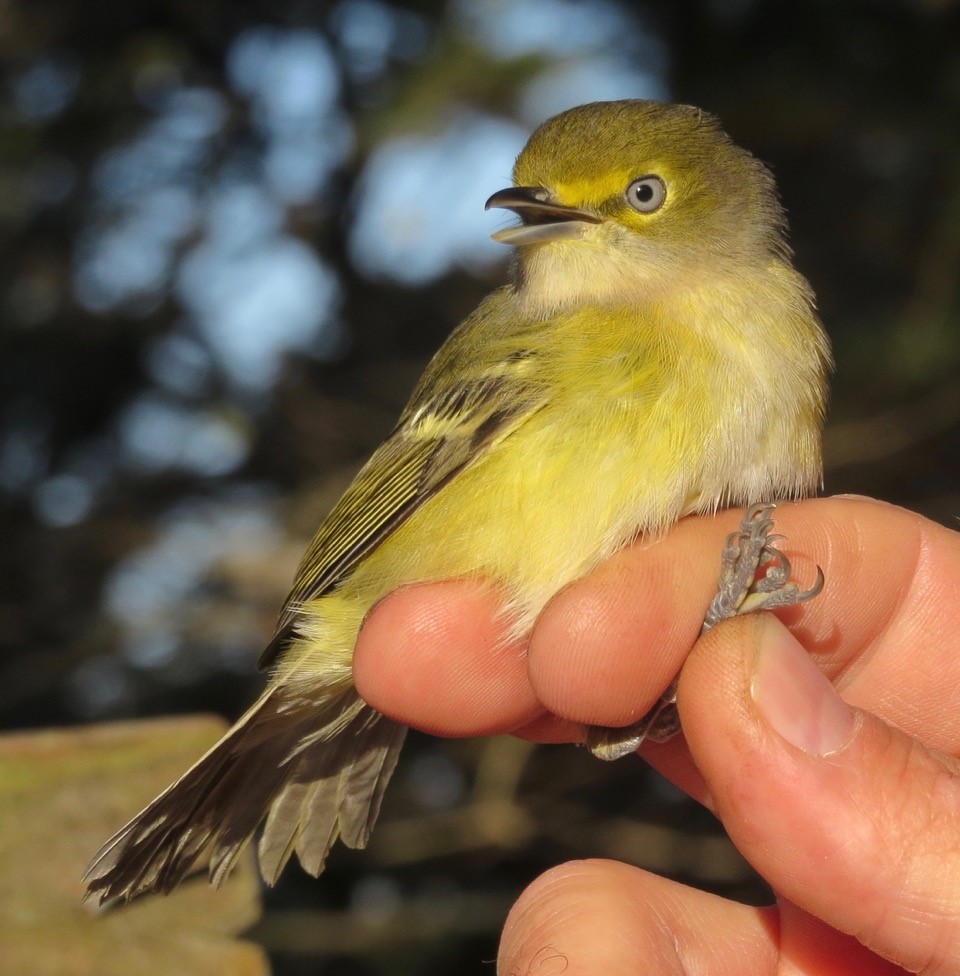 Catching more than one of these vireos is unusual for us and to have three could be another instance of that boomerang effect. Massachusetts is the northern edge of their breeding range. Because they migrate later in the fall, these birds very well could have been pushed back north by the steady southerly winds that occurred as late as the first week of November, when the bird pictured above was banded.

These migratory detours no doubt are perplexing and even dangerous for traveling songbirds who do enough flying as it is. Still, it’s a treat to see such relatively unusual and beautiful birds and it’s one of the many benefits of doing bird research on the Outer Cape.