They travel in small packs and are as reliable as the next high tide. You’ve probably seen them, outfitted with backpacks often stuffed with small blue flags.

Wellfleet Bay’s dedicated terrapin volunteers—citizen scientists, actually—take turns covering all known nesting sites in Wellfleet, Eastham and Orleans. Teams go out each morning and evening in June and July, looking for nesting turtles or signs of a newly laid nest so that eggs can be protected with a predator exclosure cage.  In August and September, the process resumes to watch for hatchlings. 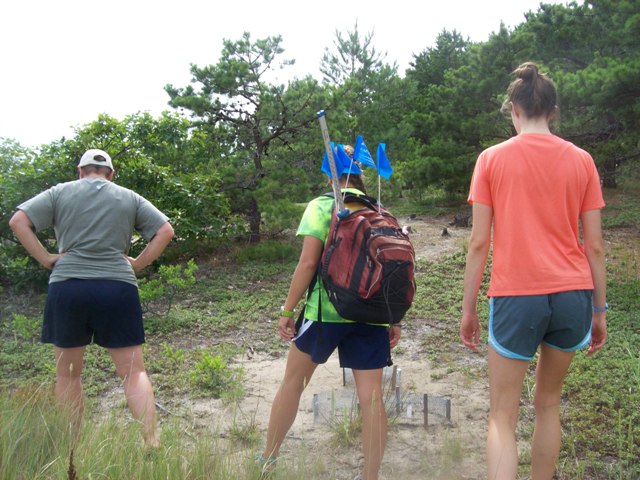 Terrapin folks keep in touch daily through an email group in which they speak their own kind of abbreviated language: (“There is a PE in the last Way 100 TG that does not have a nest tag on it. Does anyone know anything about it?”). Sometimes an email reports a shift as having been uneventful but concludes with a naturalist’s flourish:  (“0 nests, 0 tracks, 0 terrapins, 1 dead shrew”).

And consider this somewhat startling email on July 6 from Barbara Brennessel : “Found one terrapin strolling around the Mobil station in Wellfleet”.

A warm sunny morn
Perfect I could have sworn
With so many nests all week
A place to nest I thought they would seek
But all we found was a depredated nest
That darn raccoon sure is a pest. 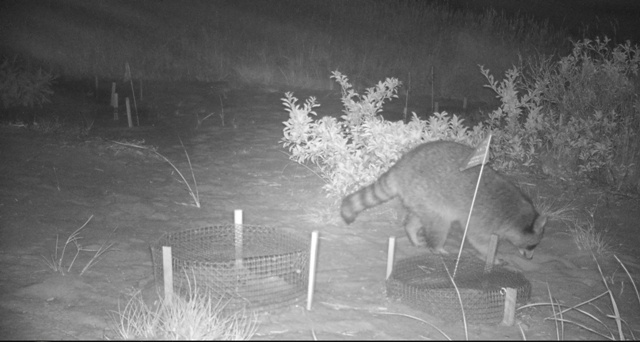 As with any wildlife conservation effort, there are often disappointing experiences, such as this report from Lieutenant Island posted by Sue Reiher on June 25th:

A discouraging 6 depredated nests this morning; 1 on the road just passed the Electric Garden, 2 along lower Way 100, 2 at Turtle Point and 1 on upper Way 100 for a total of 40 eggs.  It looks like some entire eggs, shards and all, were carried away by the marauding raccoon and some nests looked like they had been bombed. 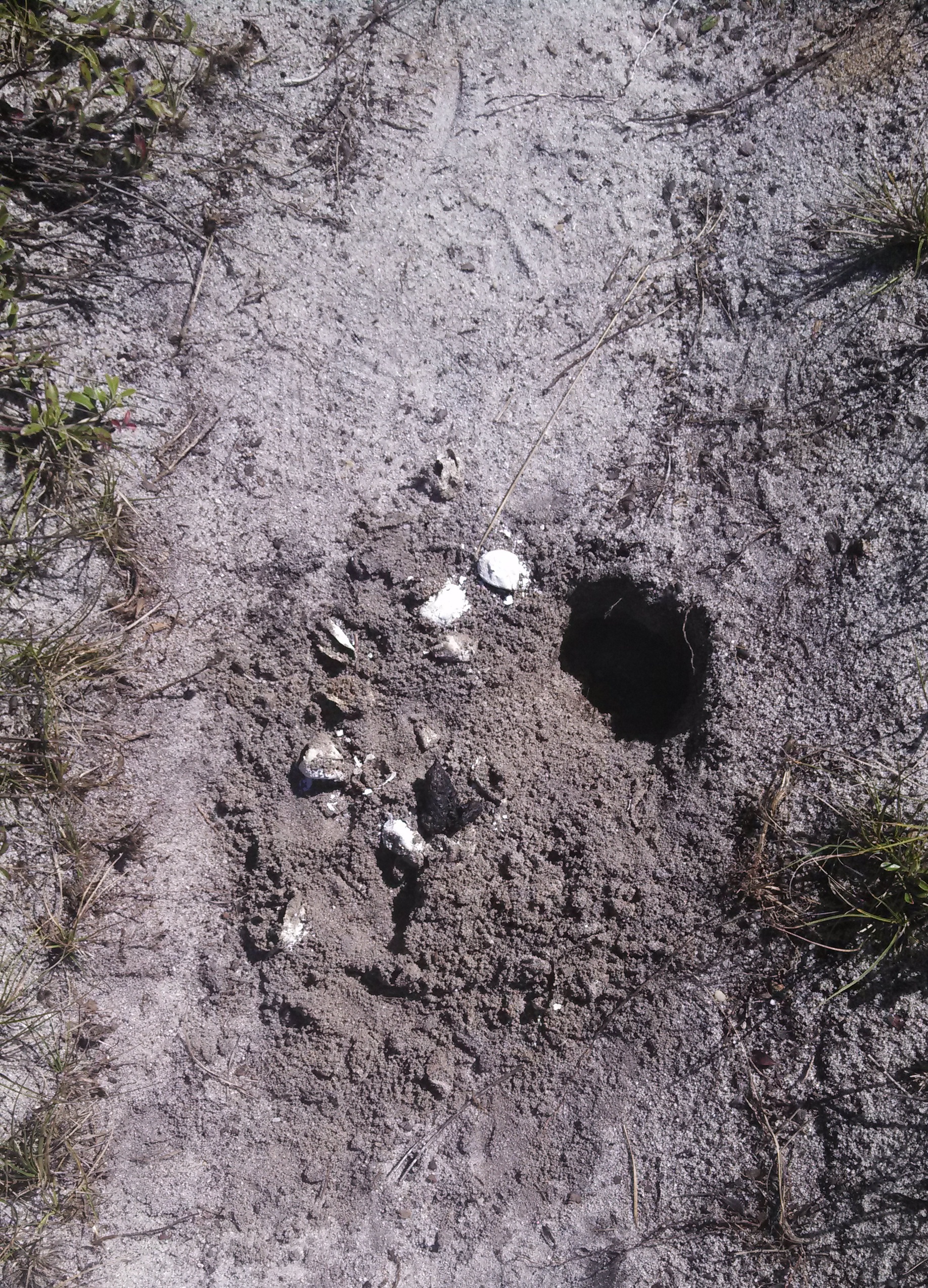 But there are uplifting moments, too. Karl and Judy Goldkamp often share some of the beauty of the marshes and uplands where they walk:

Some flowers blooming caught our eye.  Saint John’s Wort (medicinal and invasive) yellow. Called St. John’s because it blooms at Saint John’s day (June 24th). And the Butterfly weed, also know as Pleurisy Root and listed in the US Pharmacopeia up until recently, has a great botanical name— Asclepias tuberosa. Couldn’t resist displays of color while on search for terrapins. 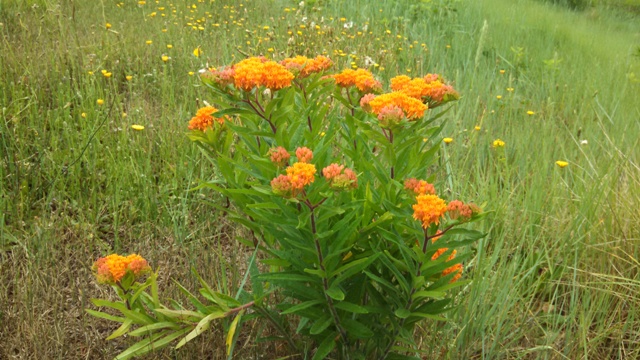 And on July 1st, with a morning of unsettled weather on Lieutenant Island, shift leader Karen Strauss shared her outing with the group:

Joyce and I were at LI this morning, enjoying the beauty of a marsh shrouded in fog. We listened to the rolling thunder get close faster than it was supposed to and hoped to get done before the skies opened up.  At Yucca we found a huge hole dug by a fox, sand scattered widely, with what we at first thought was a viable egg left behind. Alas it was cracked. We headed back to the cars. Lightening flashing in the sky.

Still, with the exception of times when nests are destroyed, turtles are hit by cars, or brutal green head flies are feasting on exposed skin, it seems there are very few bad days to be a terrapin monitor. 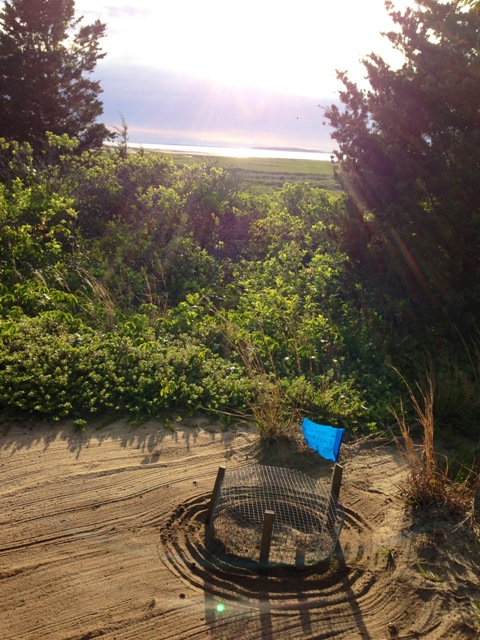