Years ago, spring always meant the return of bird banding and research at Wellfleet Bay. The Austin family, whose summer home was on what is now the wildlife sanctuary, operated an important bird research station from the 1930s through the 1950s. There was another period of banding here in the 1980’s.

Four springs ago, after a banding hiatus of about 20 years, researcher James Junda set up shop here and the bird monitoring effort resumed. 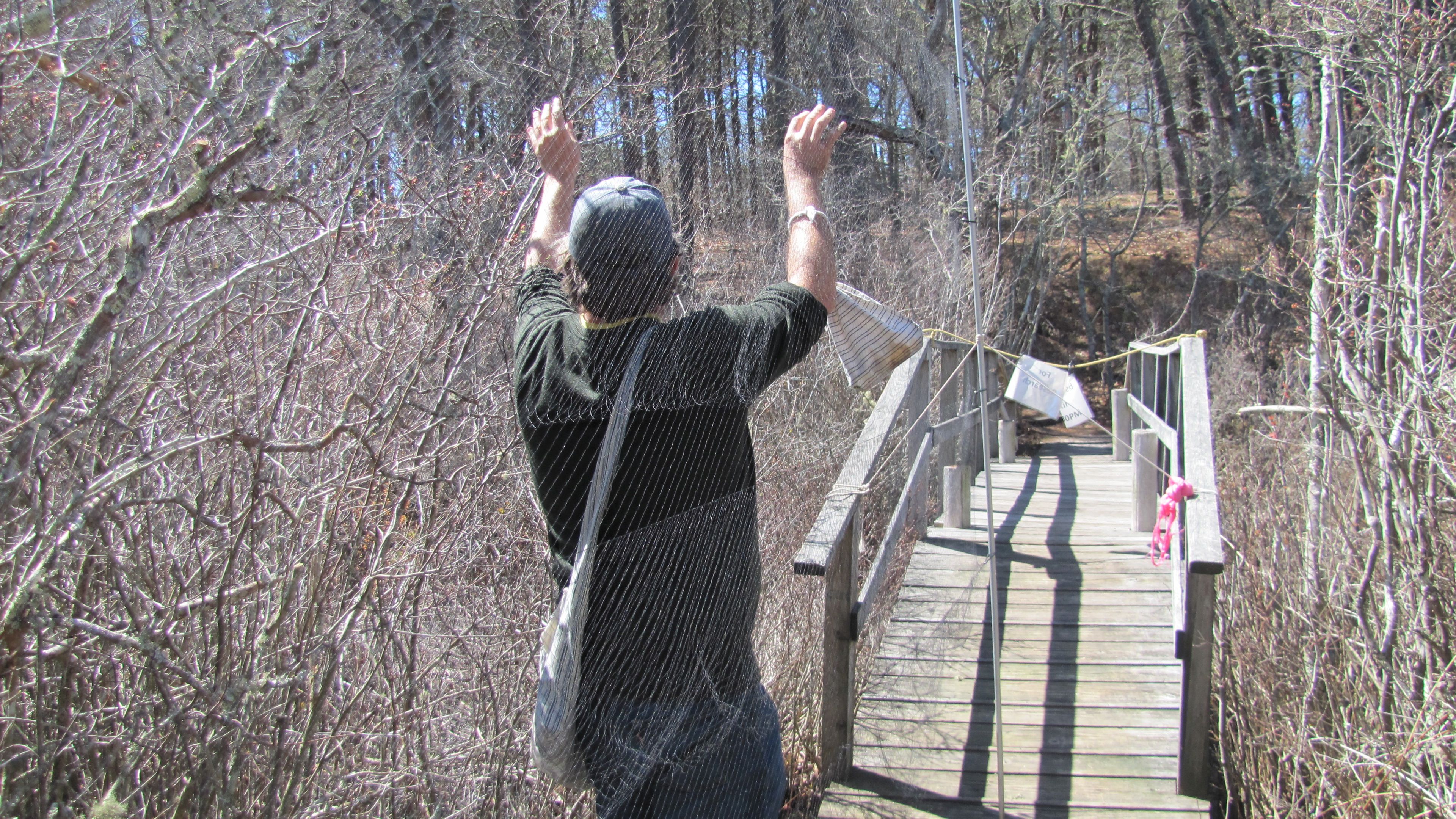 The modern dataset isn’t large enough yet to spot meaningful trends about the birds that pass through or reside at Wellfleet Bay. But as the numbers come in, they do provide fascinating snapshots about each season: who survived their first winter; who had a good breeding season;  who likely encountered a storm and was blown off course; or who had a run-in with ticks. 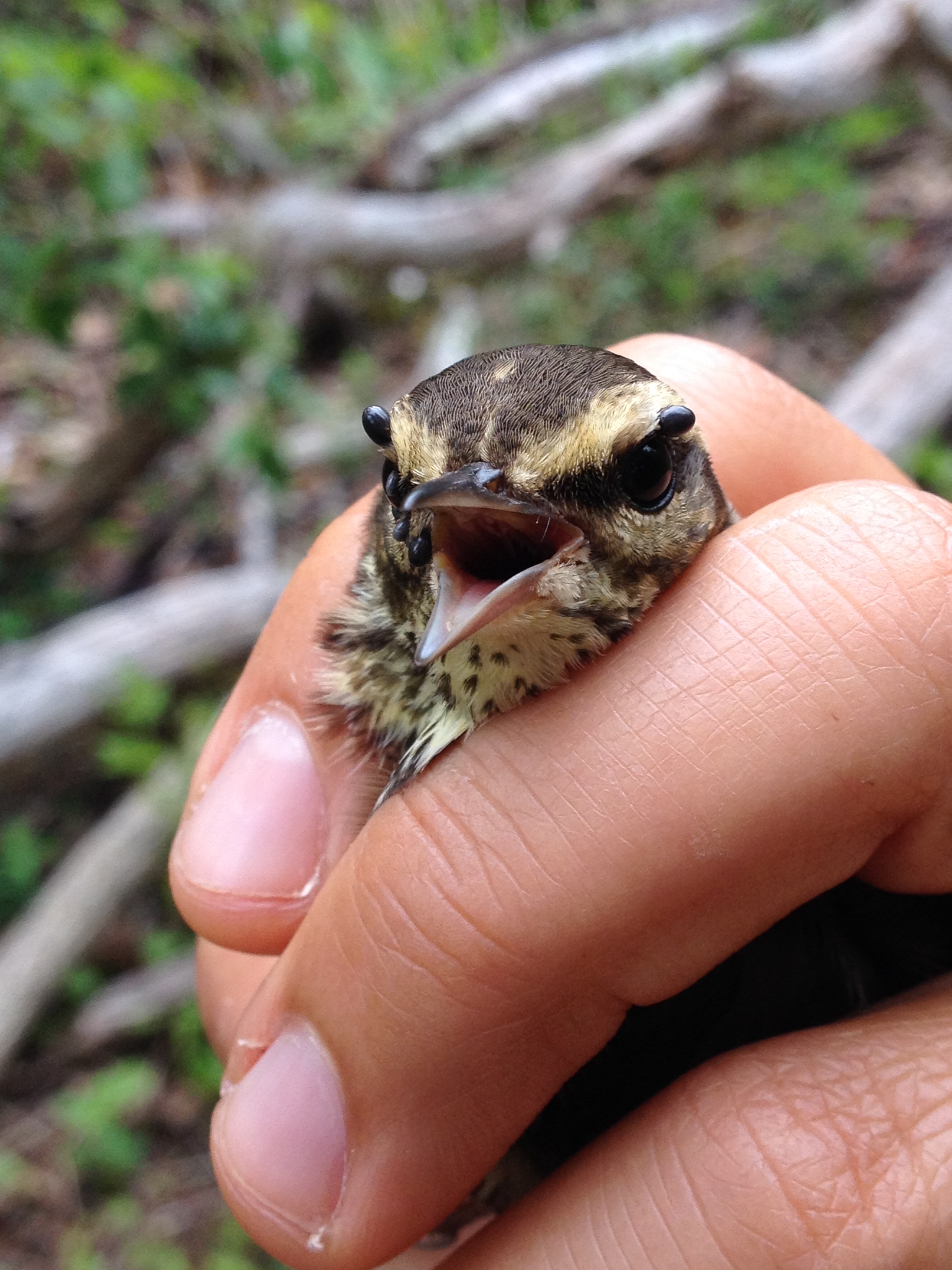 Matching ticks over the eyes of this poor Northern Waterthrush. Yes, the banding team removed them!

As James prepares to head back to the Cape and install the mist nets, we wanted to share some of the highlights he noted about last fall’s banding period. 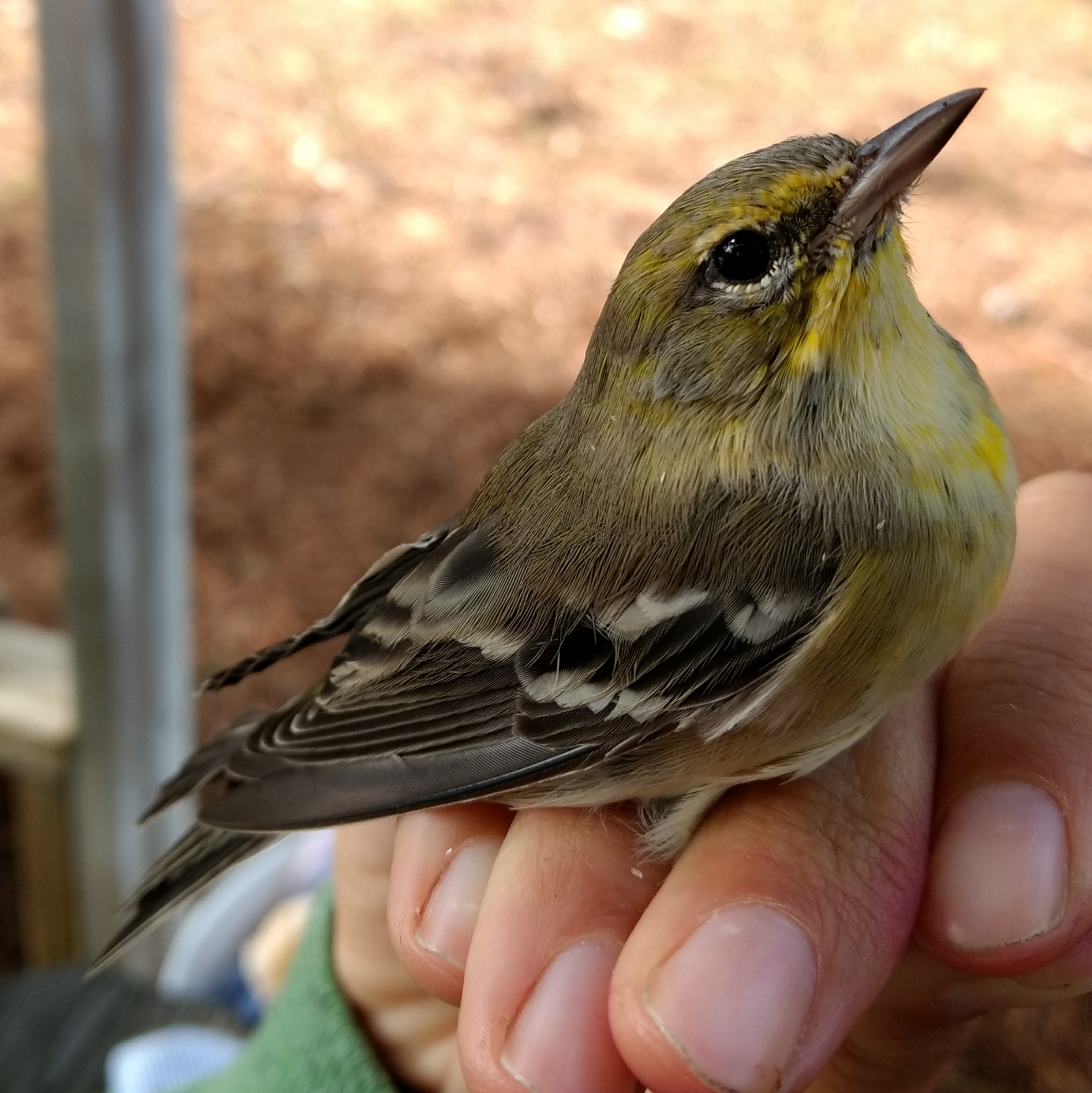 A handsome Pine Warbler. These birds also nest at the sanctuary.

2017 was another big year for Pine Warblers, the most common bird captured last fall (it was the third most common in 2016 but ranked tenth the two years before). Chipping Sparrows apparently also had a good breeding season, coming in third on the most-common-capture list compared to seventeenth in 2016. 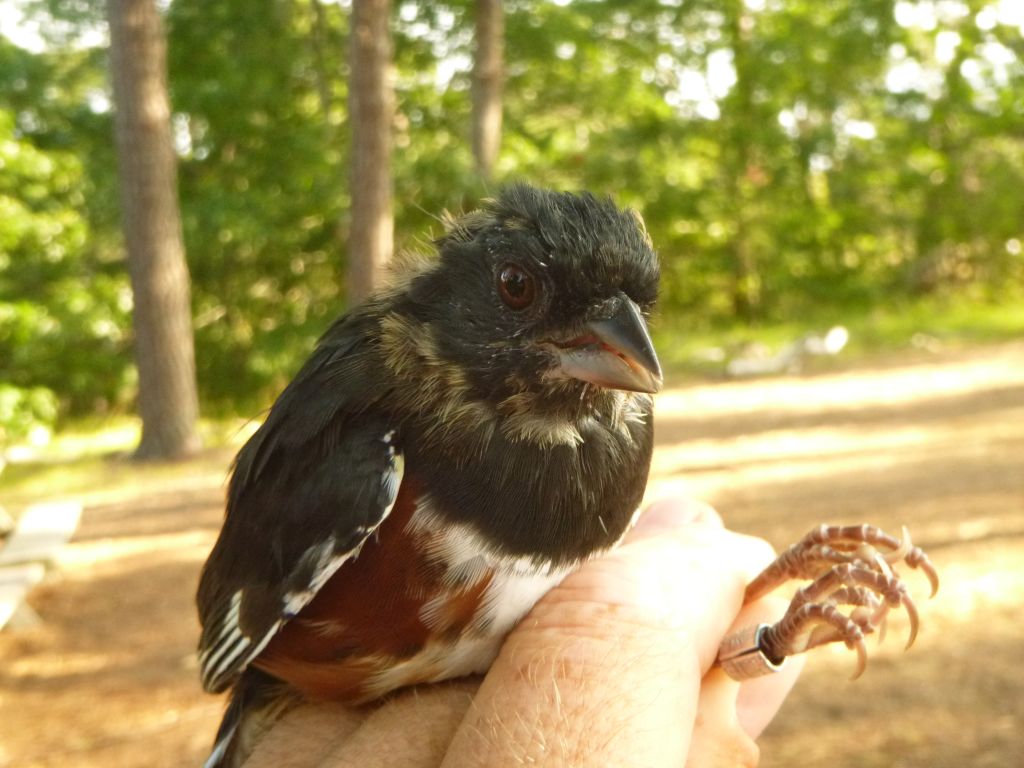 It may look like this young male towhee’s in rough shape but he’s only molting from his juvenile plumage to adult body plumage. He’s probably also a little annoyed. 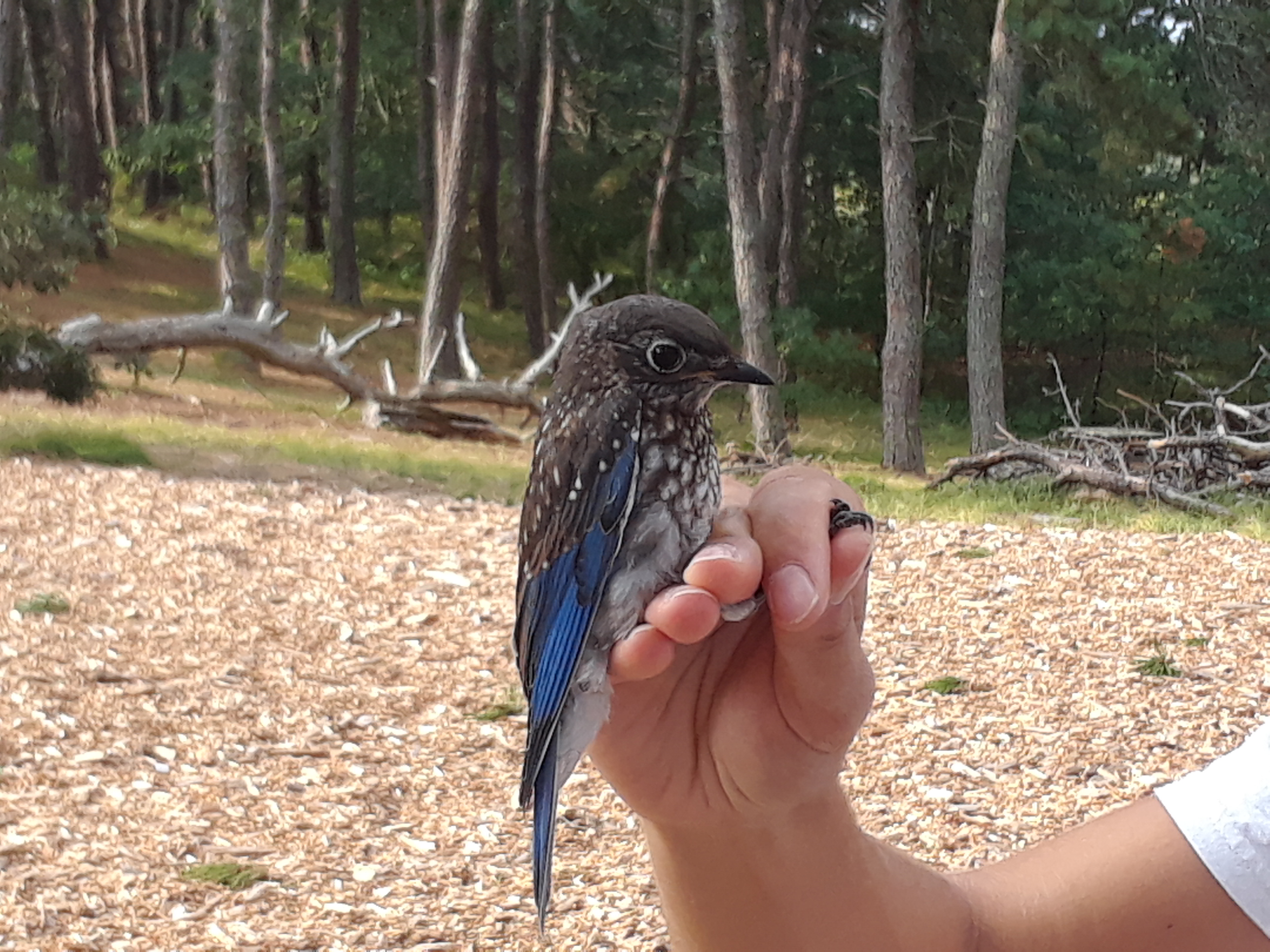 Always nice to see a new Eastern Bluebird added to the population, even if we only had a handful last fall.

Nor can we draw happy conclusions about our delightful spike in Cape May Warblers, a bird we hadn’t captured at all until last fall when we had six. Or the 29 American Redstarts we banded. Three years ago, we had only five. 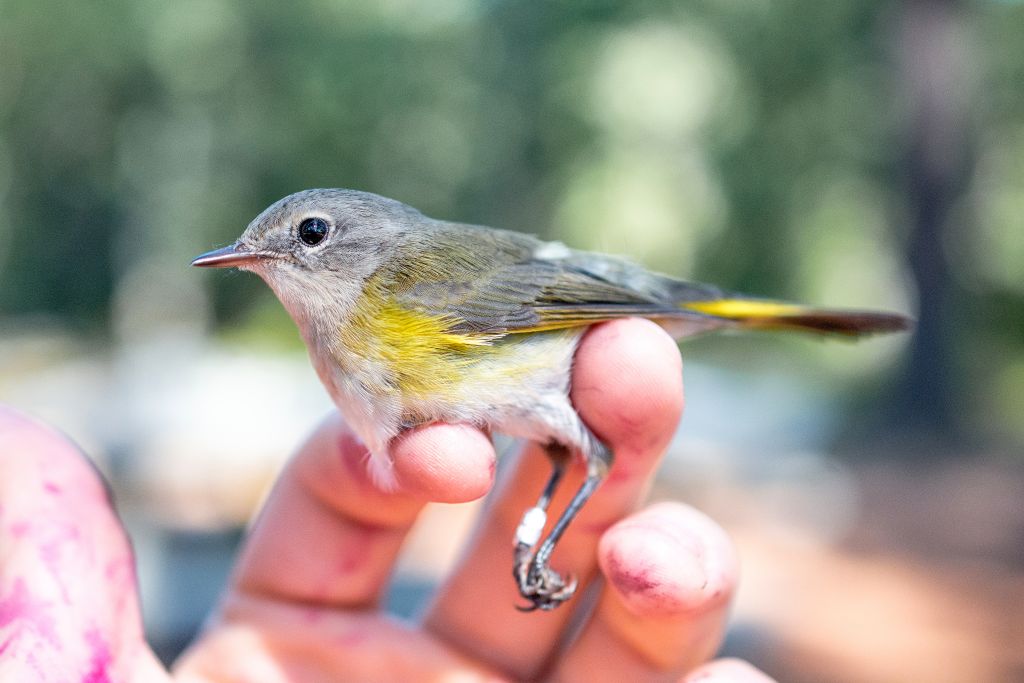 This young American Redstart was making its first visit to Cape Cod.

There are so many variables in banding: weather, equipment–we added new mist nets, which increased our overall numbers and also helped us to capture smaller songbirds. And then there’s the odd fact that some birds, including those you see everywhere, such as grackles, rarely show up in the nets in the fall.

But a season of bird banding can produce the occasional firm fact: such as the precise age of the Merlin we netted in 2015 that was first banded as a hatch-year bird in Virginia in 2009. And the south-bound Orange-crowned Warbler we banded last October that storms very likely blew back north to Nova Scotia where it was captured 6 days later.

Bird banding generates lots of questions, most of which we can’t answer yet. But we sure enjoy collecting the snapshots.

Don’t miss a chance to watch bird banding in action this spring by attending one of our public programs on Wednesday and Sunday mornings from 8-9.