The cold start to spring kept plover nesting on ice until this past week, when our first three nests were discovered—one at the recent overwash at Truro’s Ballston Beach, one at Corn Hill, and one at Crosby Beach in Brewster.

First nest of the season at Ballston_MSprague

We’ve been heartened by how fast the birds have taken advantage of that new habitat at Ballston, with the first pair discovering it last year only two months after the ocean broke through the dunes and plowed more than an acre of sand into the Pamet River. They even fledged two chicks. This year, multiple males were observed duking it out for territory and we’ve confirmed there are two pairs. 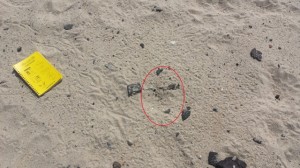 Sadly, the first nesting attempt of the year there was destoyed this week after a large group of people entered the symbolic fencing without permission, causing the disturbed birds to abandon their nest. Later, crows predated the eggs. Both human and crow tracks are visible around the nest bowl (crow tracks resemble the letter “Y”).  The good news is the pair that lost the nest has been showing signs of starting a second one, and the second pair has already been observed copulating.

The nest discovered at Corn Hill is also happy news even though that beach has supported as many as 5 plover pairs in the past. In Eastham, South Sunken Meadow Beach has one pair of birds but that beach, too, has had as many as 5 pairs. And none of the Wellfleet beaches we manage have birds so far. Brewster’s Crosby Beach has started out with one pair of plovers and a three-egg nest. Fingers crossed that they’ll be able to fledge at least one chick. 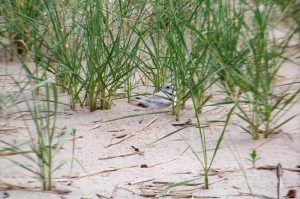 When working with threatened shorebirds, a monitor quickly learns to greet both happy and sad news with restraint. The one encouraging thing you can count on at this stage of the year— the birds will keep trying.