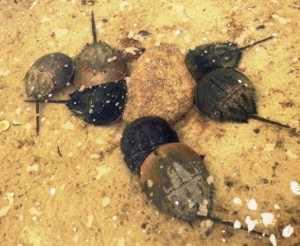 Spring! I think we understand the concept, but it’s something we rarely see on the Outer Cape. This year, it looked like it wasn’t going to be even a remote possibility.

Having said that, the first of the salamanders have migrated and piping plovers and osprey are returning. Water temperatures, however, are still cold and I think it will be a while before the first of the horseshoe crabs come in with the tides and begin to lay their eggs–an event that has been going on since the glacier created Cape Cod 25,000 years ago and sea levels started to rise.

In Wellfleet, we have little reason to think there will be any noticeable increase in the horseshoe crab population. They’re not going to go extinct, but they show no signs of recovering. There is one bright spot in some Massachusetts Department of Marine Fisheries data from a survey last fall that showed a slight upward tick. Maybe we’ll see more crabs once spawning begins in May and June.

There is a new player in the horseshoe crab story. The Red Knot, whose dependence on horseshoe crab eggs is well known in New Jersey and the mid-Atlantic but largely undocumented in Massachusetts, was recently listed as a federally-protected threatened species. 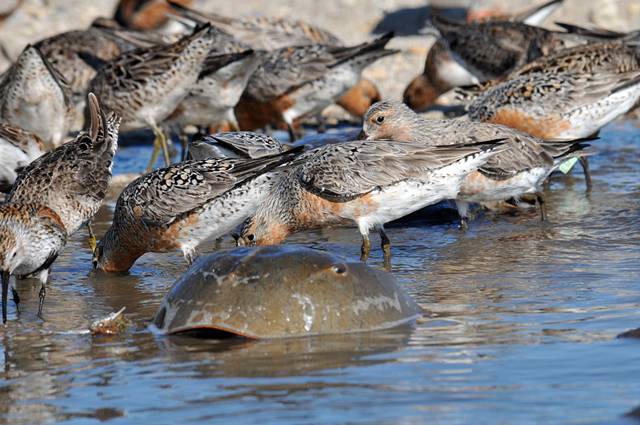 The horseshoe crab and Red Knot connection may have been ruptured in the 1800s and only now are we seeing them re-connect. We might be seeing more spring Red Knots as they feed on horseshoe crab eggs at Nauset, South Beach, and Monomoy where horseshoe crabs are protected and populations of crabs are the highest levels recorded in the state. This is pure speculation on my part, but it has been percolating for a while as more information has come in from multiple historical sources.

In 1850, there was a report from a market hunter (they used to shoot lots of shorebirds for food for Boston residents, but that’s another story) of over 25,000 Red Knots on Billingsgate Island. They wouldn’t have been there if there weren’t either horseshoe crab eggs in the spring or tiny blue mussels around the remaining oyster banks. This is truly a fascinating story that is just beginning to be teased out.

We hunted the Red Knot and other shorebirds, like the Eskimo Curlew, to the edge of extinction and harvested horseshoe crabs for fertilizer and pig food in the 1800s and early 1900s. Those are facts. Then we wonder why the Red Knot no longer feeds in Massachusetts during its spring migration. As I said, maybe we are seeing the restoration of this ancient connection that was lost over 150 years ago.