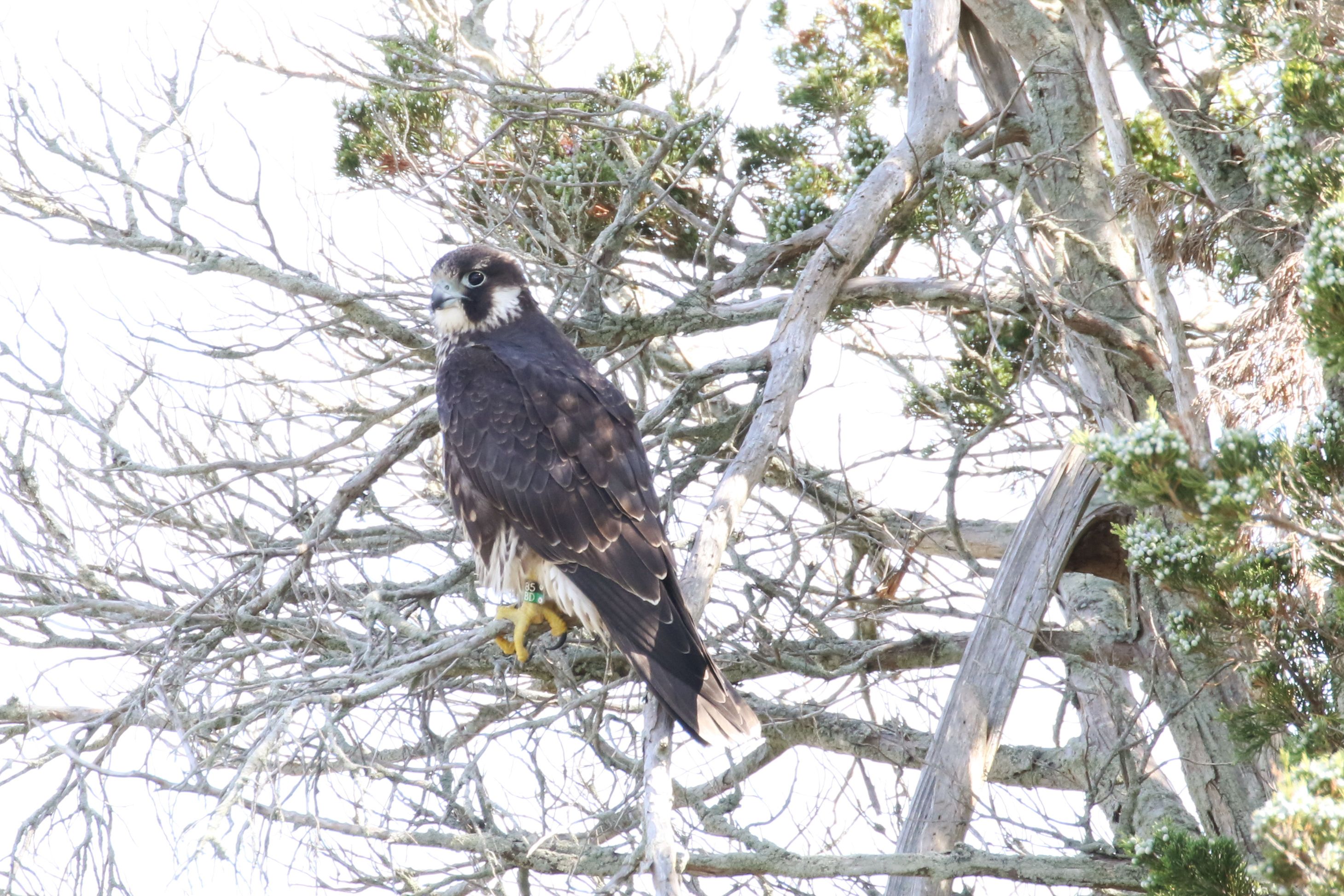 City girl in the country (photo by Marcy Ford).

A quick check with Tom French, assistant director of the Massachusetts Natural Heritage and Endangered Species Program, confirmed that the bird banded “85/BD” (the number 85 appears on a black band over a green band with the letters B & D) was a hatch-year female banded in Providence this summer.

Tom put Marcy (and by this time Wellfleet Bay’s Bob Prescott) in touch with Peter Green, a Providence photographer and raptor enthusiast who’s been following this female’s nest (and many before it) atop the city’s so-called Superman Building. The nest was also featured on a web cam sponsored by Rhode Island Audubon and shows the history of Peregrine nesting on the building since 2000. 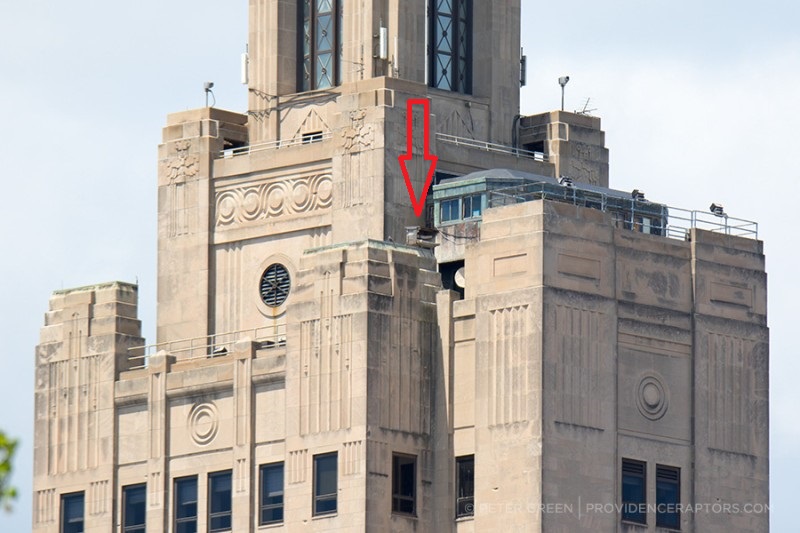 Peter told us the young female came from one of 5 eggs in the nest, four of which hatched. He also supplied a baby picture he took when the birds were being banded. He believes 85/BD is the chick in the back and to the right. 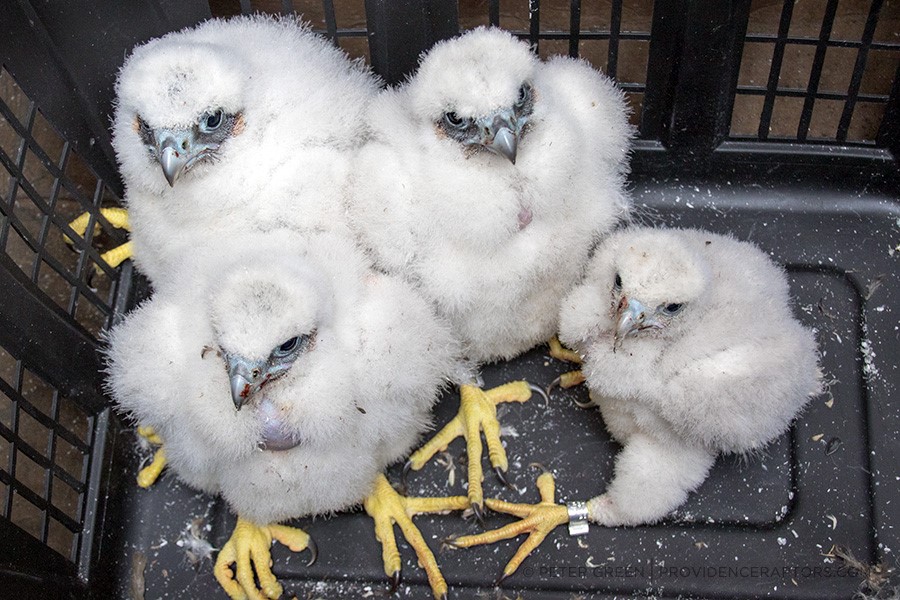 The remaining nestlings included a second female and two males, one of whom was the last to hatch and was quite scrawny (front right).

Peter lives near the nest building and he was able to follow the birds’ development closely. Here, 85/ BD is taught how to properly prepare a pigeon for dinner. 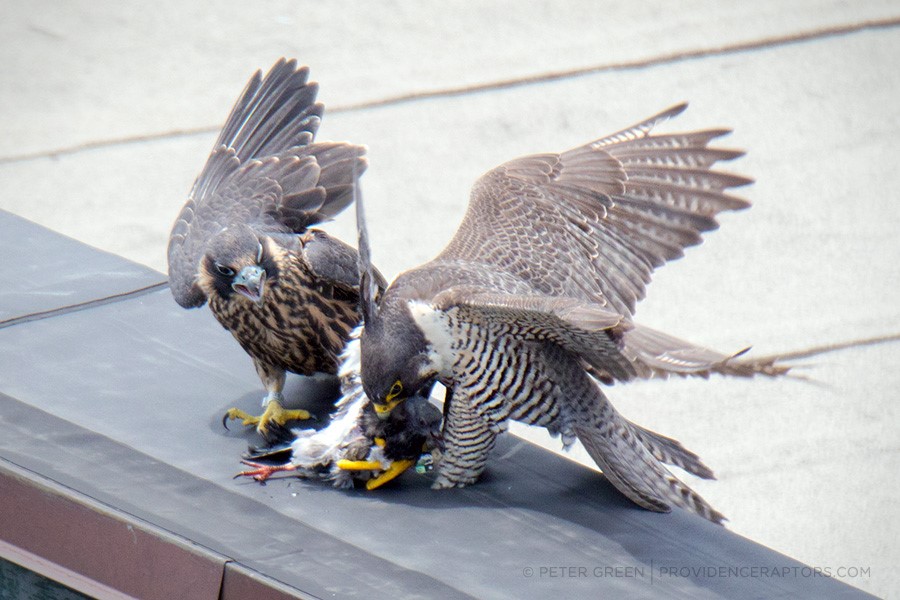 These Providence Peregrines are another example of how well the birds have adapted to city life. Peregrines, which historically have nested on cliffs or other elevated perches in open areas, have found a new niche in urban life, thanks to tall buildings and bridges and lots of pigeons and rats. Migrating shorebirds is what usually draws them to coastal locations in the fall.

And that’s likely why 85/BD is visiting Wellfleet Bay. Peter Green was happy to hear of this bird’s whereabouts, though he says it’s odd to see her perched in a tree. ” I always see them on brick, concrete, and steel!” 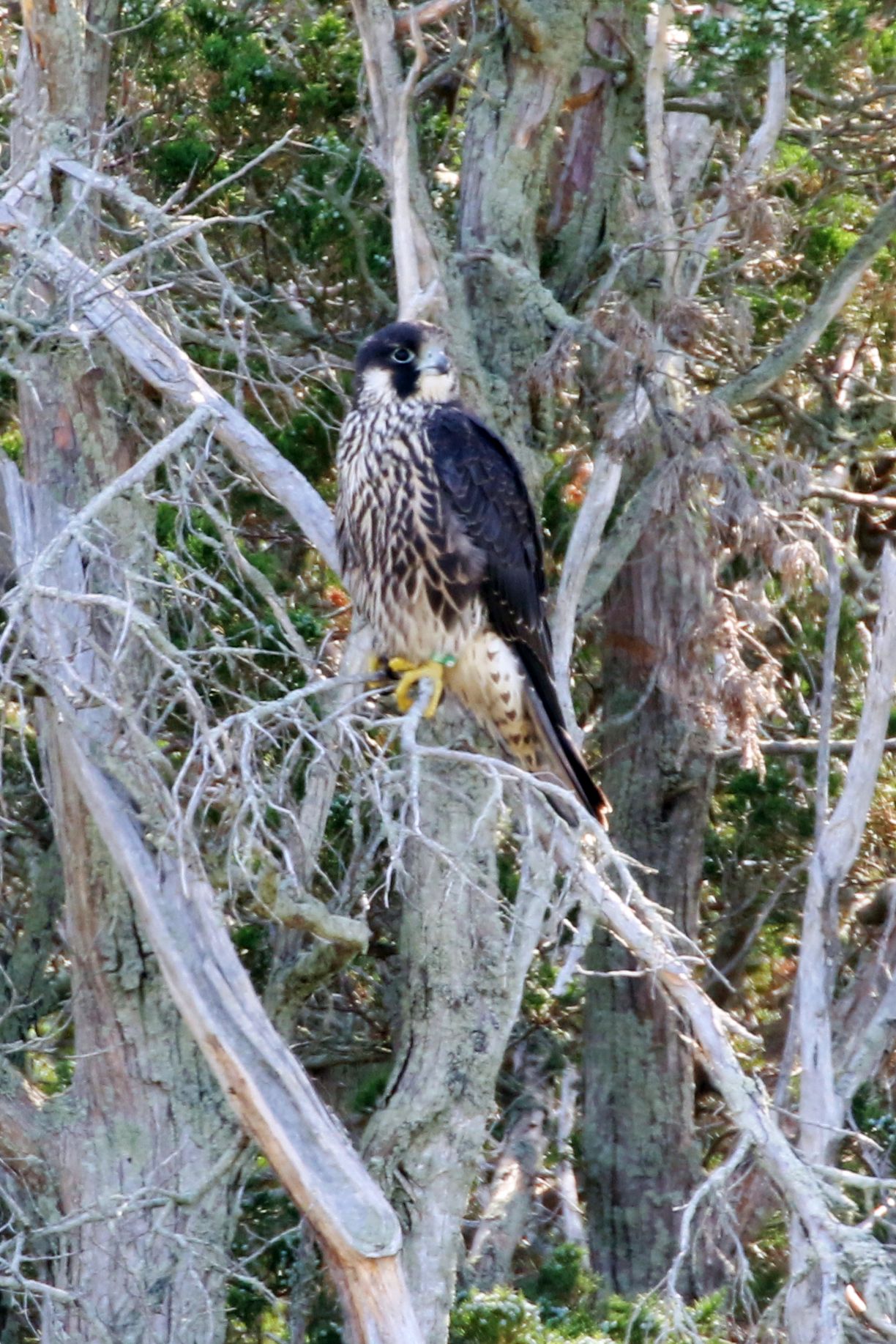 Where will 85/BD be heading next? Thanks to her band, we may hear more about her. (photo by Marcy Ford)

As we report on 85/BD of Providence, we are reminded of the last banded young peregrine to spend time at the sanctuary.

Back in 2008 another young city bird born in Rochester, New York came to Wellfleet Bay in late summer and ended up spending the winter on the Cape. Happily, this female, named Quest, is alive and well and breeding in Toronto! Here’s a picture of Quest back then: 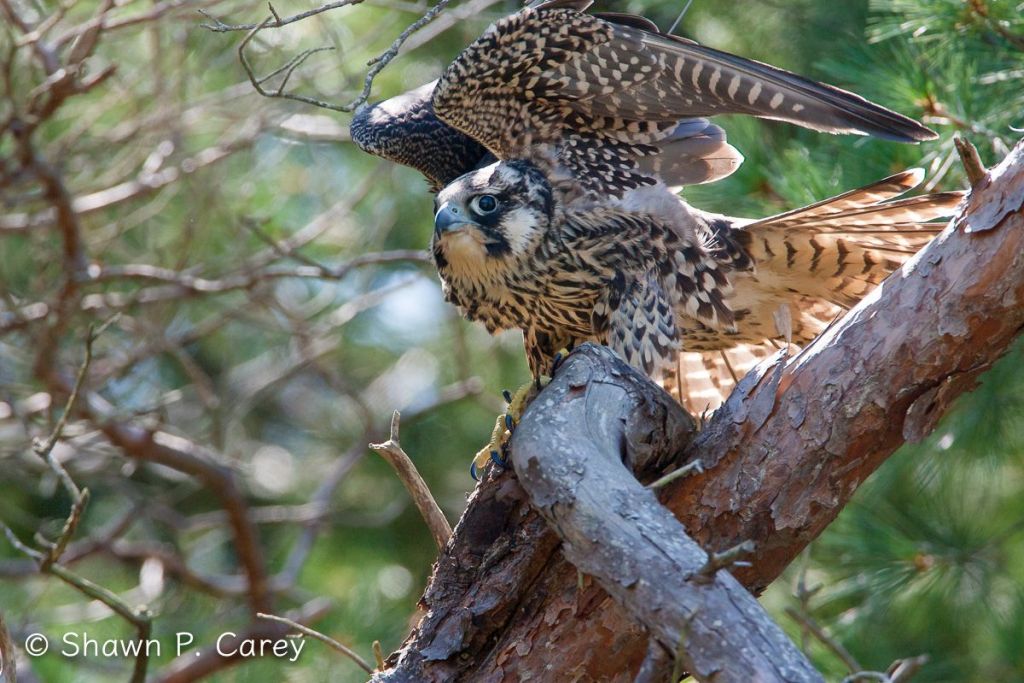 Quest when she visited Wellfleet Bay in 2008. She apparently enjoyed the Cape because she hung around the Chatham area through that first winter. (photo by Shawn Carey)

And here’s Quest this summer, watching over her four chicks, all of whom fledged. Quest is monitored by the Canadian Peregrine Foundation which reports she spends her winters around Ontario. 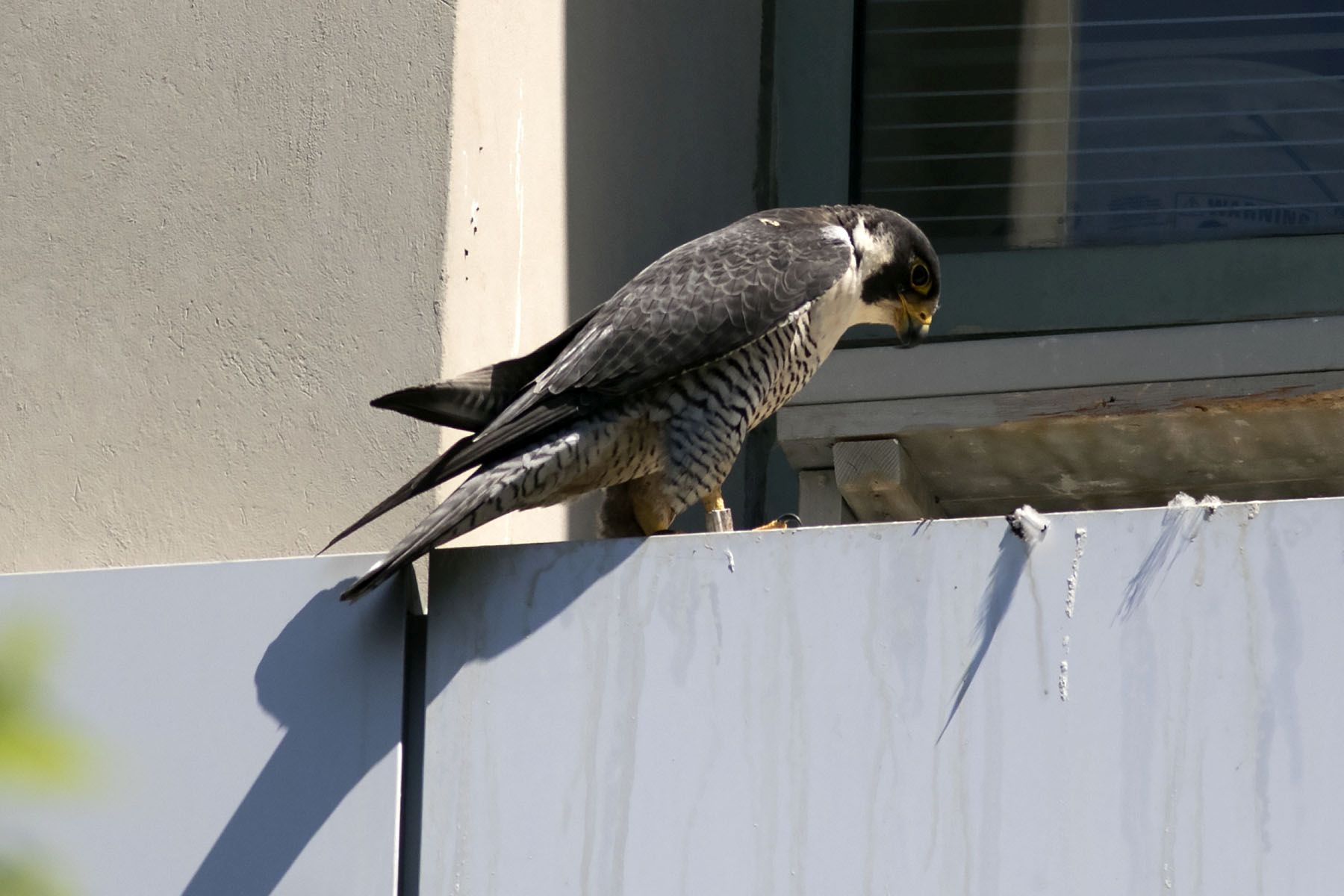 Quest at her 2017 nesting site in Toronto, Ontario. (photo by Ann Brokelman).

Here’s hoping both Quest and 85/BD have many more years ahead of them.