Recently, some very strange objects suddenly appeared in the day camp field at the head of the Bay View Trail. 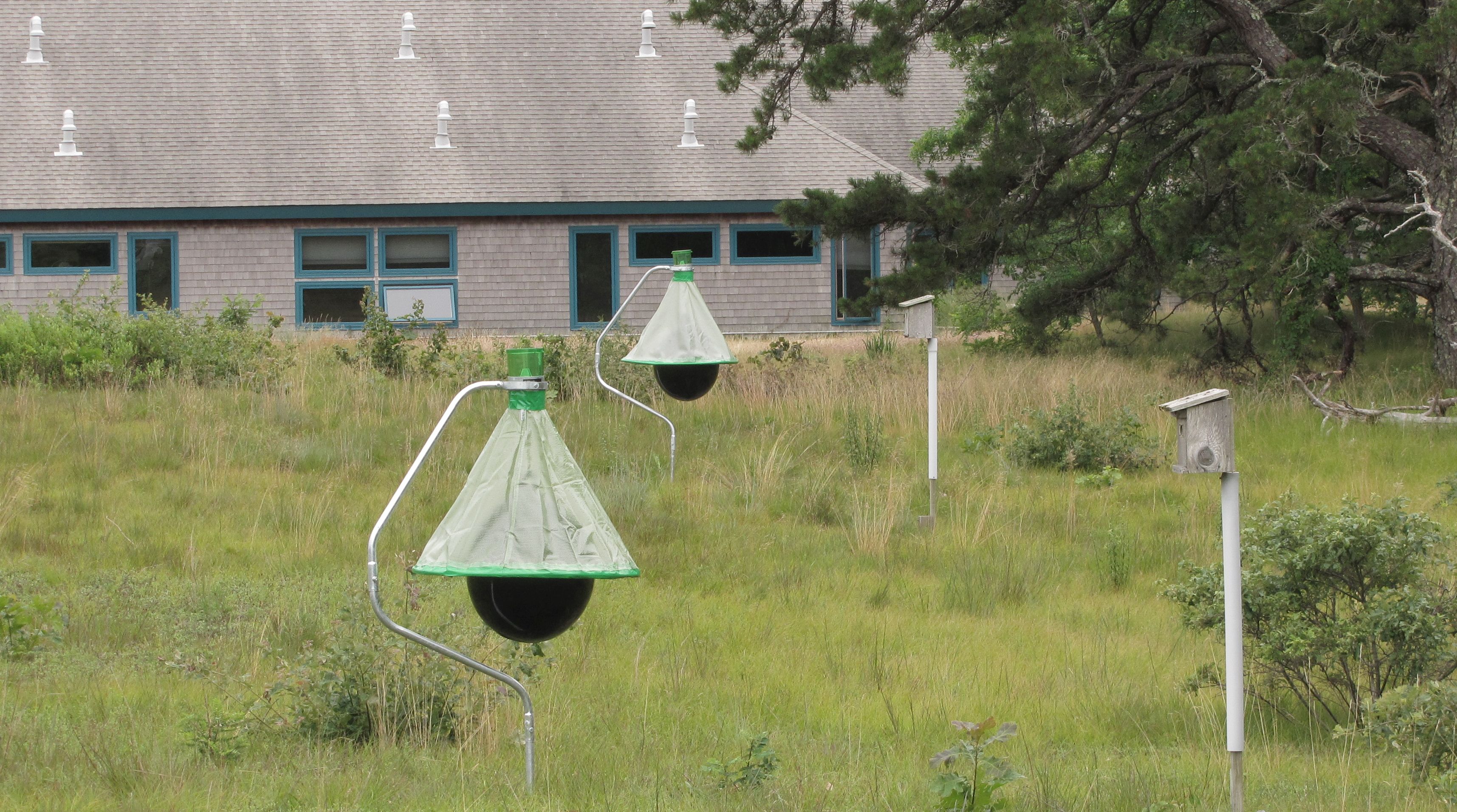 Other worldly-looking things which appeared in the field!

These space alien-looking contraptions were installed by our day camp’s Ecologists group  with the help of property manager James Nielsen for a scientific experiment.

The objects are called H-Traps  for biting flies, including the dreaded greenhead fly that terrorizes beachgoers during mid-summer. 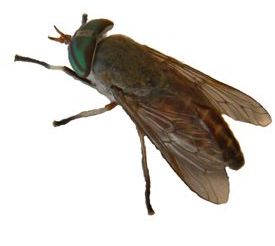 One of the experiment’s targets: the greenhead fly, denizen of the salt marsh.

These new traps include a large round black plastic sphere, a cone-shaped plastic sleeve that hangs above it, with a plastic collection bin at the top.

Without any lures, these odd-looking contraptions are able to attract greenheads, horseflies and other biting flies in the Tabanidae family and trap them. But how??

First, we should note that the biting flies are all females looking for blood to produce eggs. They typically find a good supply in large animals–such as people and horses. Both prey species give off two things that attract the flies– warmth and carbon dioxide. The black spheres absorb the sun’s warmth and emit fly-attracting heat. 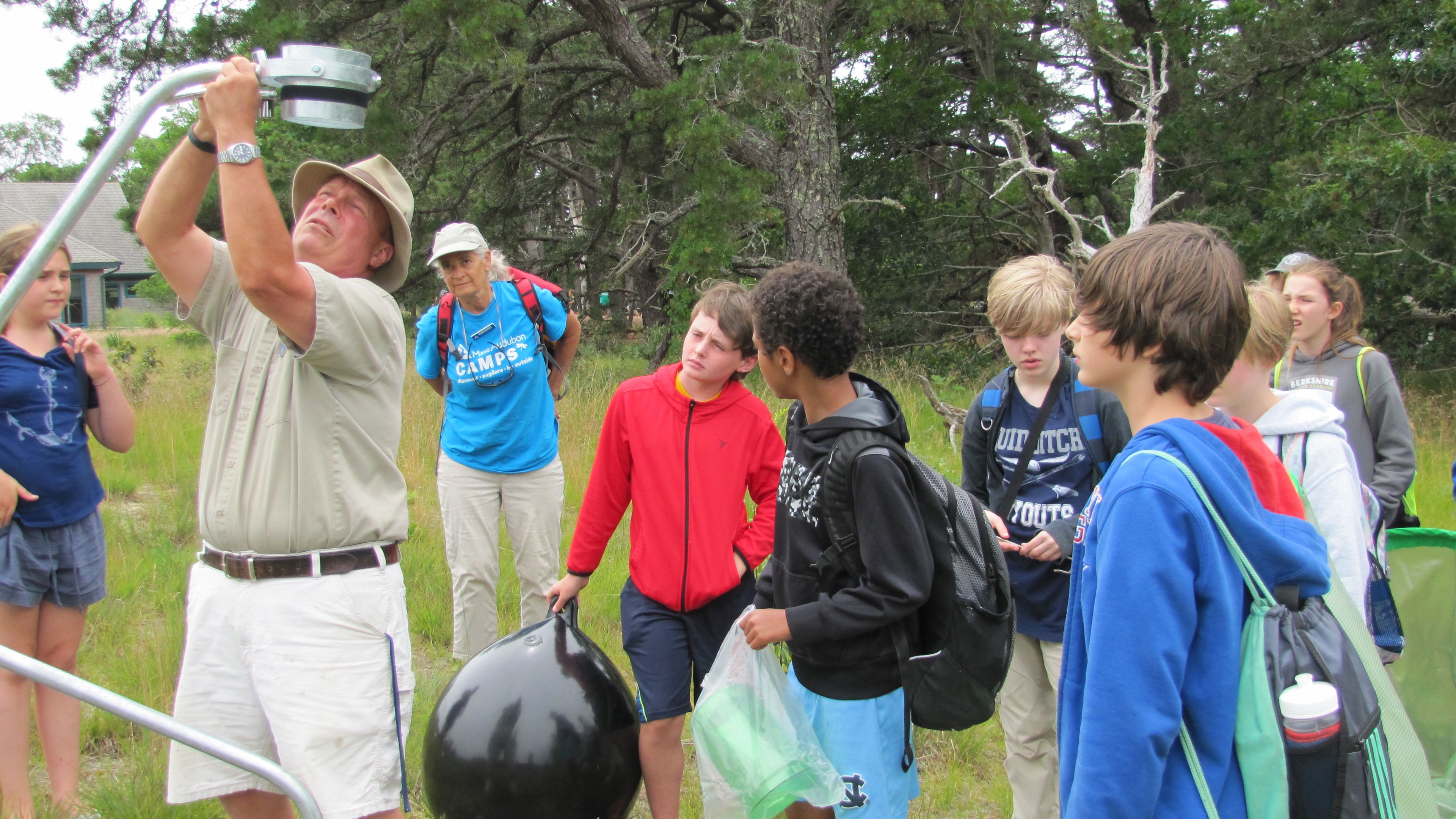 The black sphere looks and feels like an exercise ball.

James demonstrated installing the first trap. Then it was up to the Ecologists to do the rest: 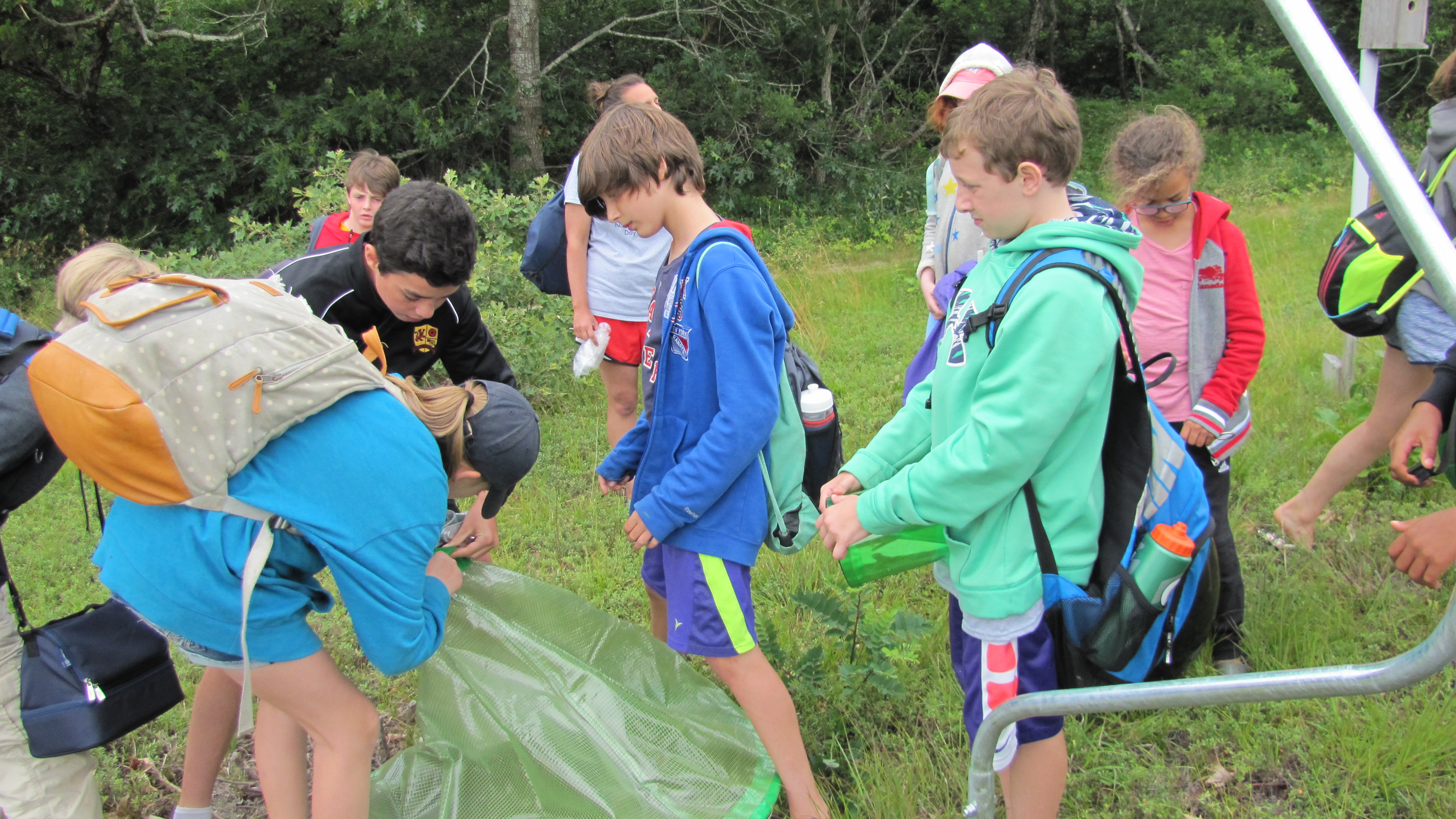 Connecting the green funnel with the metal holder which will attach to the frame.

The trap design is based on a second fly factoid: After the female bites, she typically flies off vertically–straight up. If she does this from the black sphere, she’ll find herself inside the green funnel and eventually in the collection bin at the top. 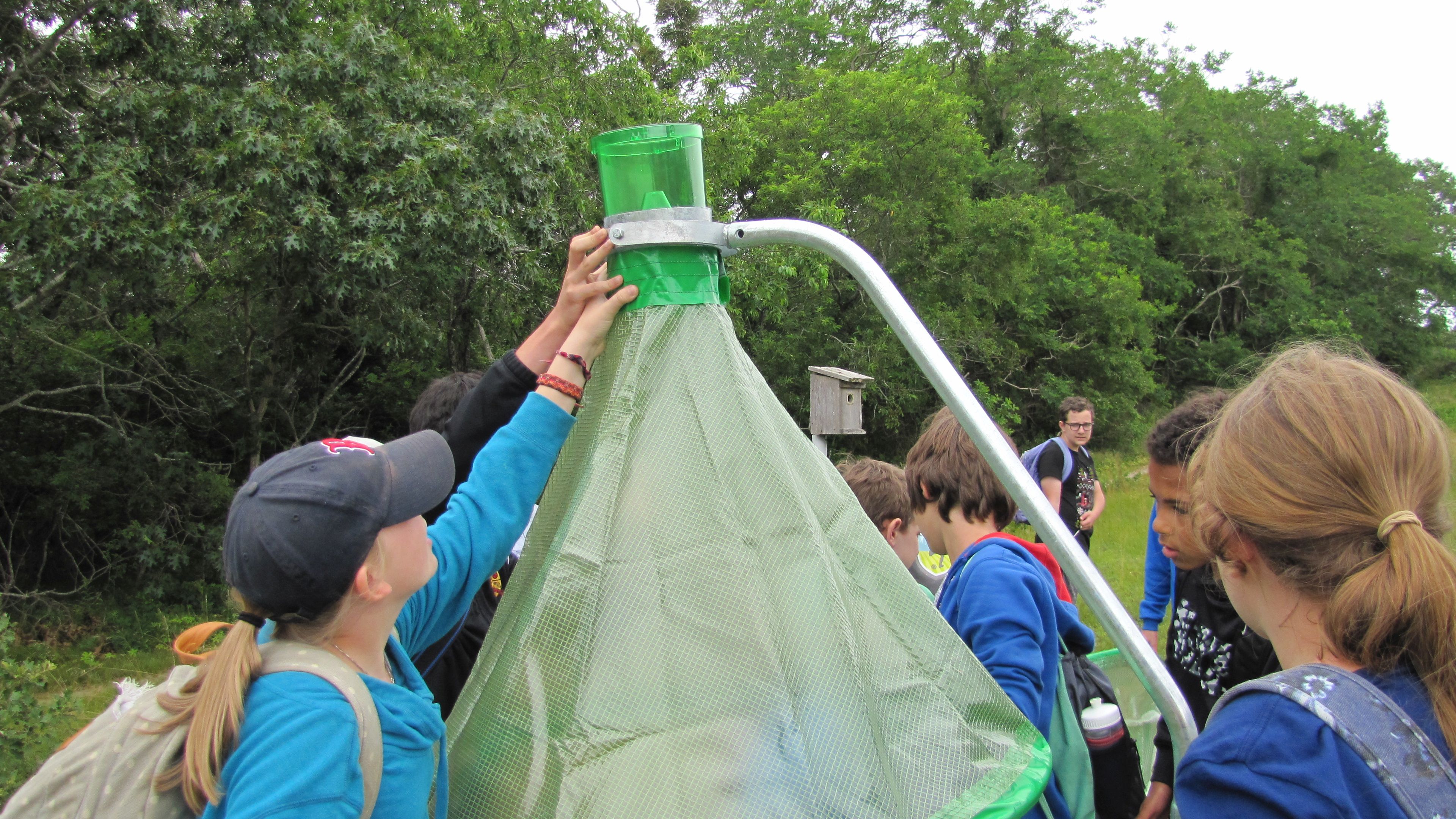 James helped the campers with the first one but the kids installed the final two on their own within minutes.

As with most projects, our day camp crew made quick work of installing the traps. And it didn’t take more than a couple of minutes to achieve their first catch: 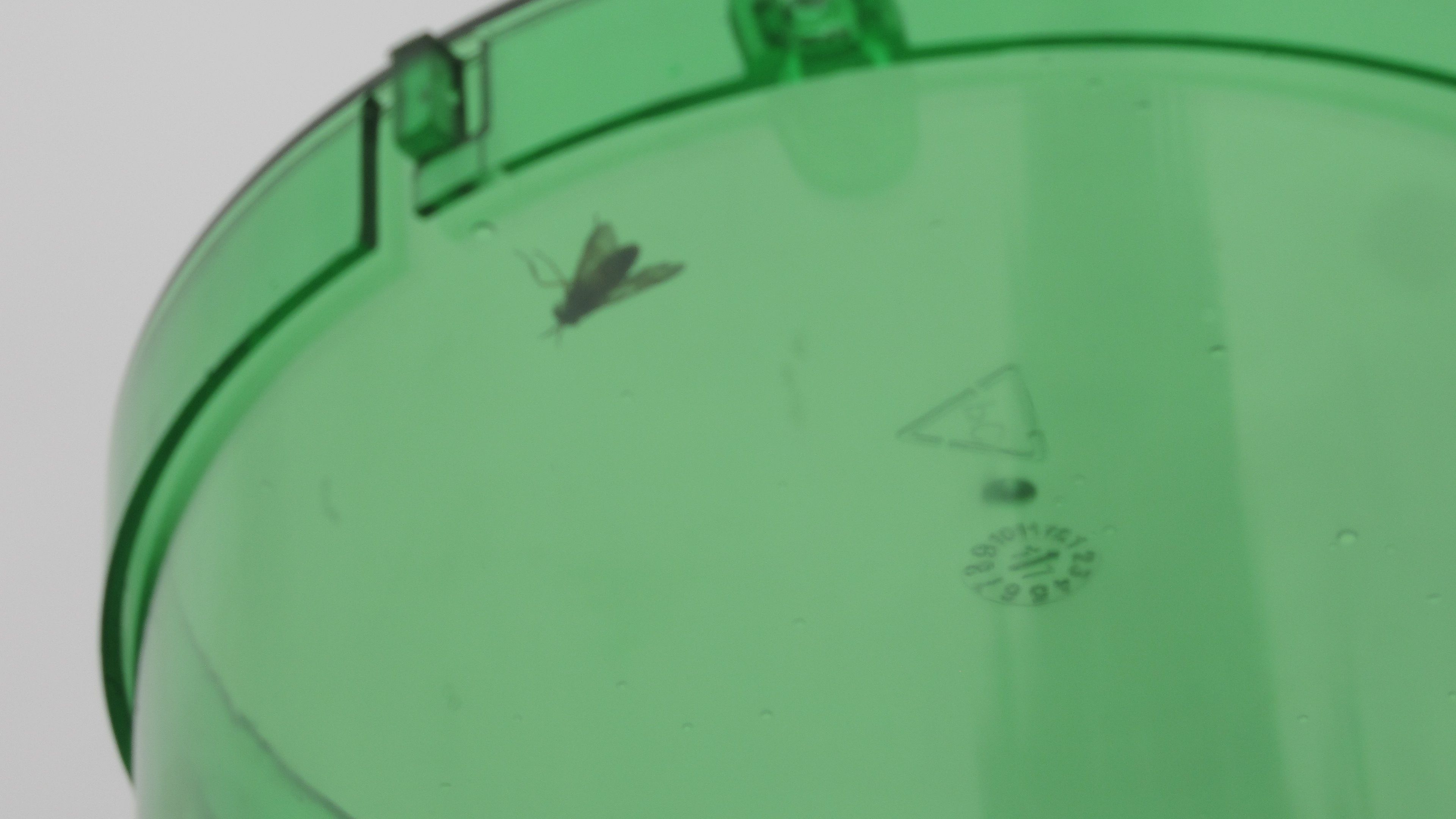 But the next step is to introduce two different types of lures (the ingredients of which have been found safe by the EPA) to assess which attracts flies better.

The campers will learn to use the scientific method, follow experimental protocols, and collect and maintain the data that will be turned over to the fly trap manufacturer after the summer. 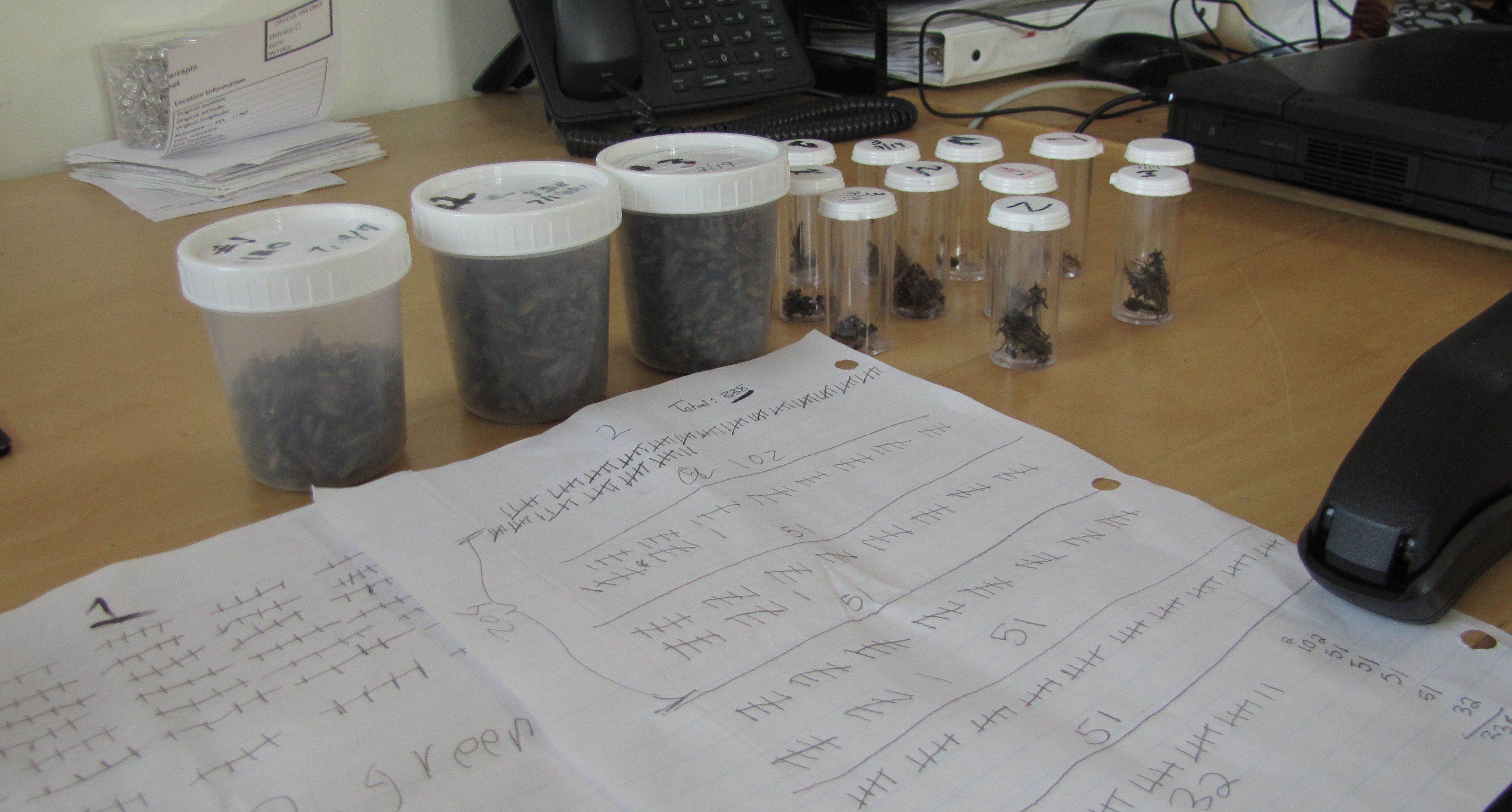 Our thanks to Robert Bedoukian, a distinguished scientist and entrepreneur, who reached out to Wellfleet Bay to provide a meaningful research opportunity to day campers. Robert and his wife Gail, from Connecticut  and Eastham, donated all the material needed and will work with staff during the two month study while they await the results of the research.