At a glance, this year’s terrapin season was a big success.. 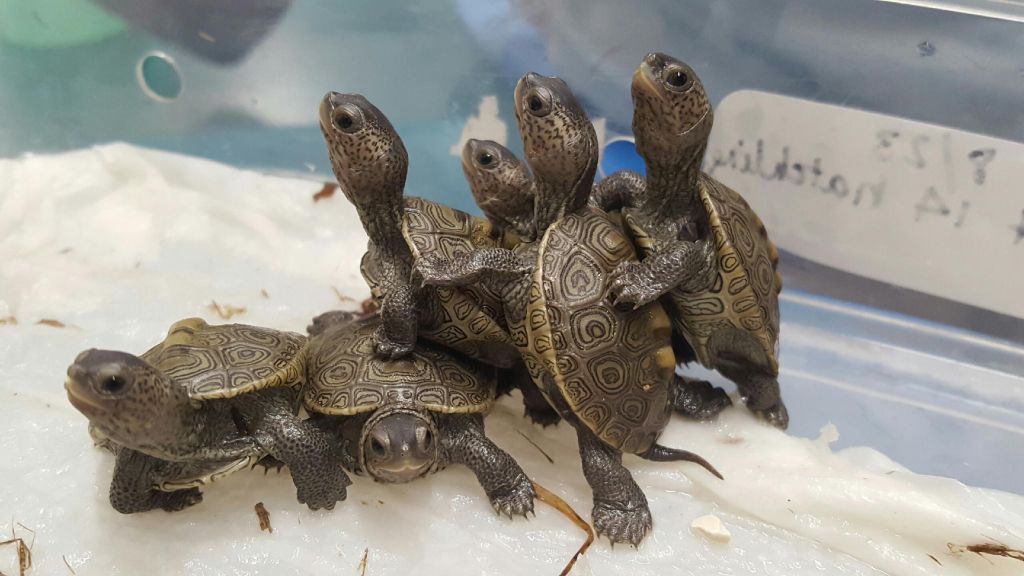 2017 was a prolific nesting season for Wellfleet Bay’s diamondback terrapins.

Thanks to the hard work and dedication of over 100 volunteers, we were able to protect a total of 385 terrapin nests in Wellfleet, Eastham and Orleans–more than ever before. And–amazingly–we’ve also released over 4,500 terrapin hatchlings so far! 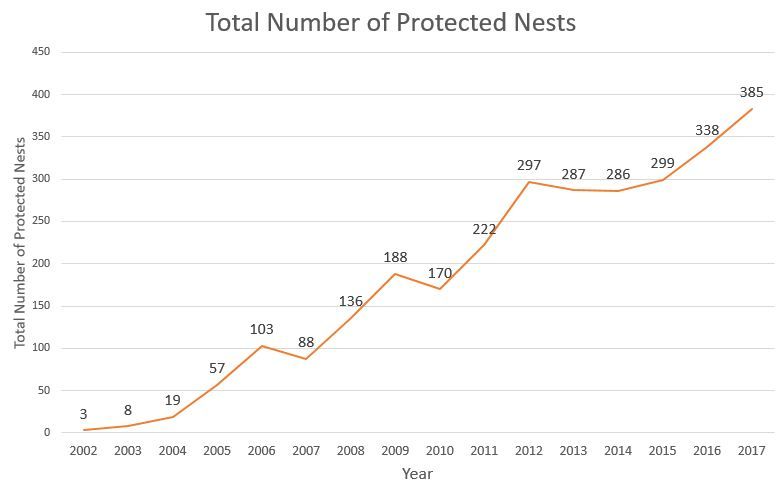 Lots of progress over the past 15 years!

This upward trend is likely due to a combination of factors: (1) we’ve homed in on where nests are laid and expanded our monitored areas accordingly; (2) there are fewer predators (mainly foxes) digging up nests & eating the eggs before we get a chance to find them; and (3) the number of sexually mature females laying nests has increased thanks to ongoing conservation efforts since the early 2000s. It’s the amplification of this third factor that will undoubtedly have the most positive long-term impact on the terrapin population size over time. 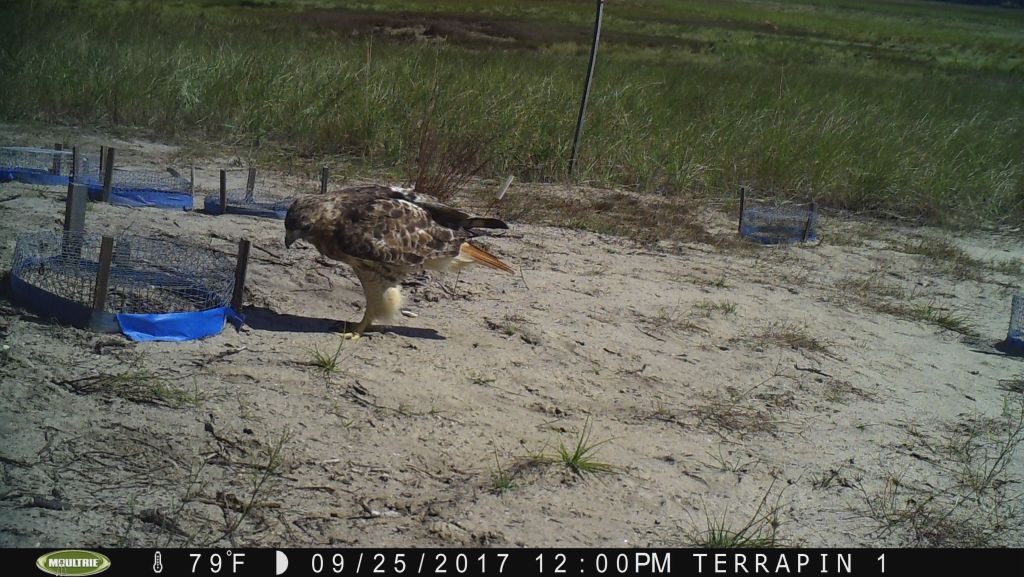 Our game camera at Turtle Point (Lt. Island) caught a curious red-tailed hawk peering over some hatchlings inside a PE.

By the end of the season, we found a total of 127 nests at WBWS: 73 protected, 29 wild (successfully hatched out on their own) and 25 depredated (dug up and eaten by predators). That’s a total of 7 more nests than were found in 2016. And while we protected 8 fewer nests than last year, having an additional 17 wild nests (and 2 fewer depredated) more than made up for it.

At Lieutenant Island across the bay, we found a record-breaking 179 nests, 92 of which were protected. Of those remaining nests found, a whopping 28 were wild & hatched out successfully on their own (8 in 2016), while only 59 were depredated (88 in 2016). This decline in predator activity is largely due to the fox population being decimated by mange. 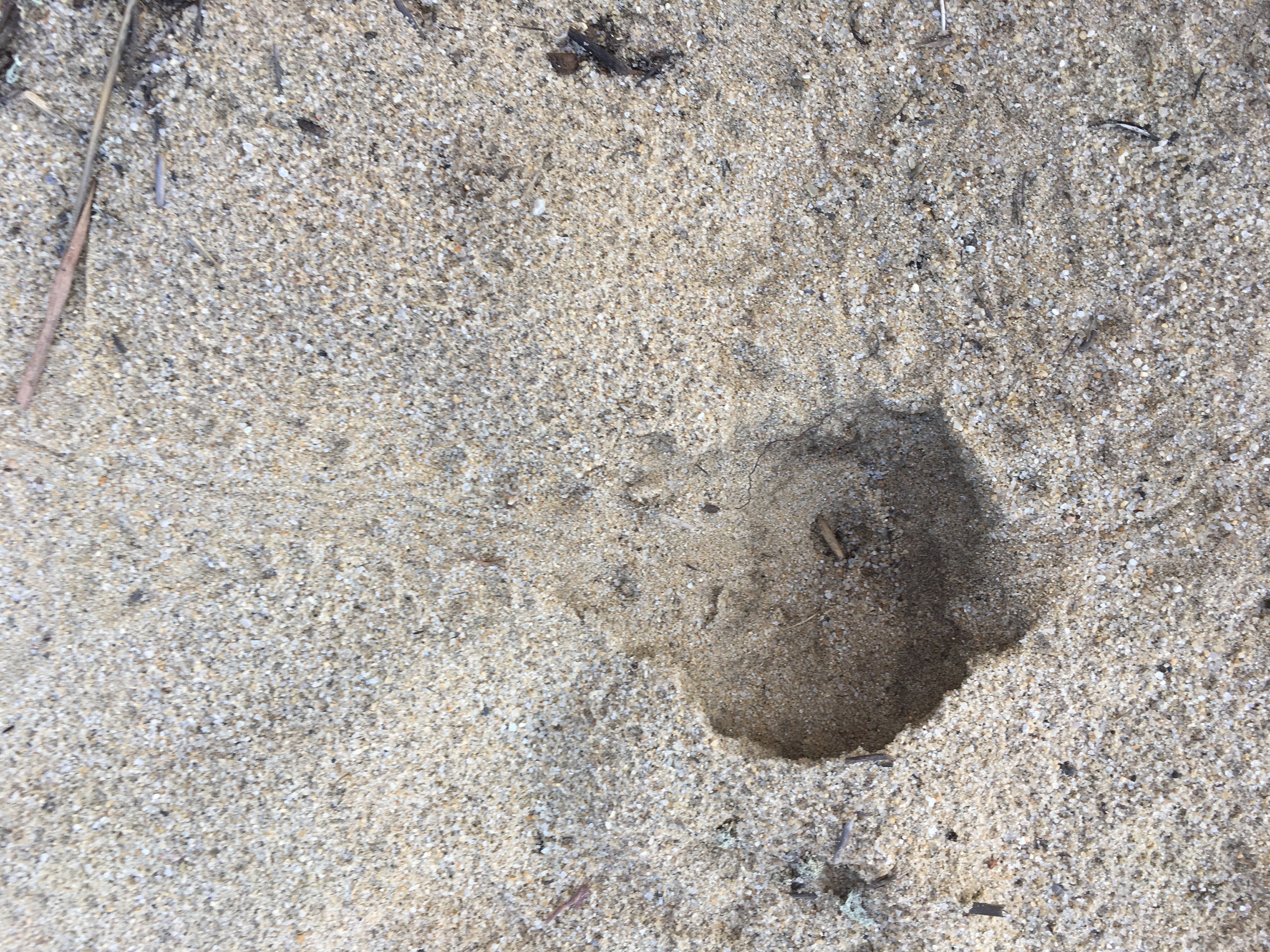 Volunteer Steve Griffin snapped this picture of a wild nest that did well all on its own (note the hatchling escape tracks!).

But despite this year’s success, it became apparent during this long season that there is still much to be learned about our local terrapins .

For one thing, the whole season lasted much longer than usual. In the past two years, females began nesting on June 15th. But in 2017, the last nest was found on July 31st, two weeks later than the last nest found in 2016. With nest incubation periods lasting anywhere from 60 to 100 days, this meant the hatching season would also probably extend later than usual. In fact, we were still monitoring protected nests in the field and finding hatched wild nests along the way until October 16th!

Once a nest reaches 90 days incubation, the protocol is to remove the predator exclosure and dig down into the nest just enough to see whether or not there are still eggs incubating. We typically find either live eggs that just need some more time or a nest that has been compromised in some way, rendering the eggs non-viable. This year, however, we were pleasantly surprised to find healthy hatchlings hanging out below the surface in roughly three-quarters of the protected nests we opened. This begs the question: What are they doing down there? 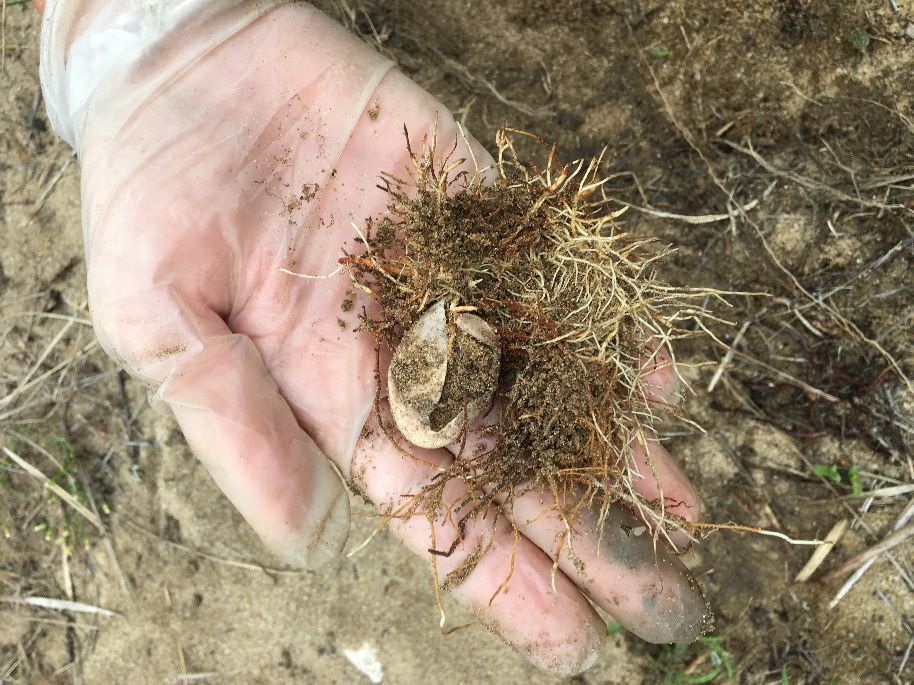 Maybe the cooler, wetter weather this summer and fall resulted in extended incubation periods and encouraged more hatchlings to stay in their cozy underground nests when they weren’t forced out by maggots or ants. Perhaps they were even planning to overwinter down there, rather than emerge and scatter to find a new hiding place. But we don’t know for sure.

We also uncovered a number of nests with viable eggs. In order to speed up the hatching process, we gently removed these eggs from the ground during the last week of our terrapin shifts and placed them in incubators set at roughly 83°F. In just a couple weeks we’ve hatched out over 60 terrapins this way. Incubator time has even helped “premature” hatchlings absorb large yolk sacs in less than half the time it would take at room temperature. 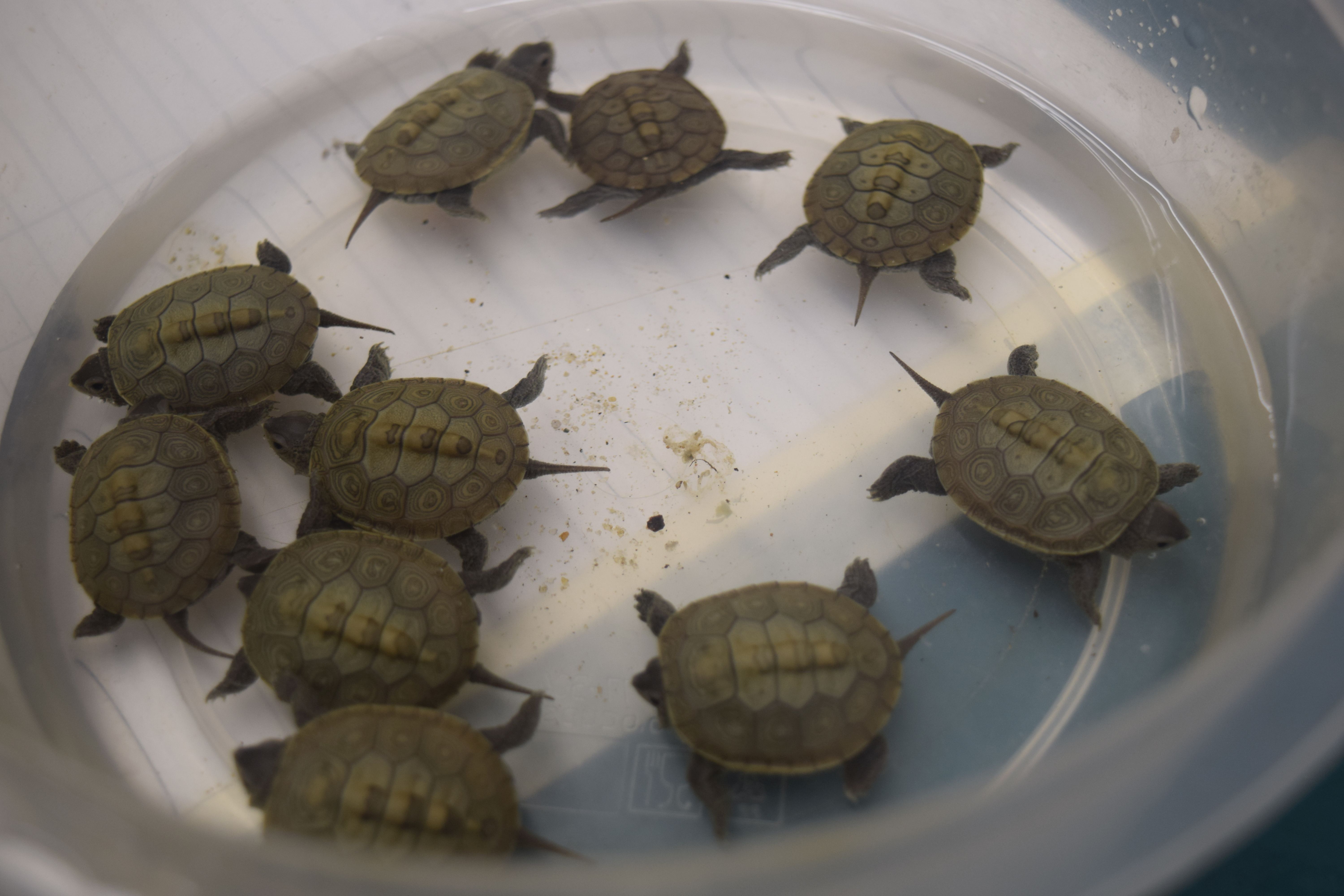 We’re delighted with the nesting success this summer. But one overarching question remains and we took some steps to try to answer it: How many diamondback terrapins live on Cape Cod? Since we can’t count every single terrapin, calculating a population estimate will require several years of intensive mark-recapture efforts.

In order to lay the groundwork for this, we conducted a pilot study in Wellfleet using Passive Integrated Transponder (PIT) microchip technology. Trained staff and volunteers PIT tagged  approximately 200 local terrapins, providing each one with a unique & permanent code that will allow it to be easily identified in the future. Over time, we hope to track individuals more closely and figure out just how much the population is rebounding due to our conservation efforts.

But for now, I think it’s safe to say that the annual assistance provided to these Threatened terrapins has not gone unnoticed. 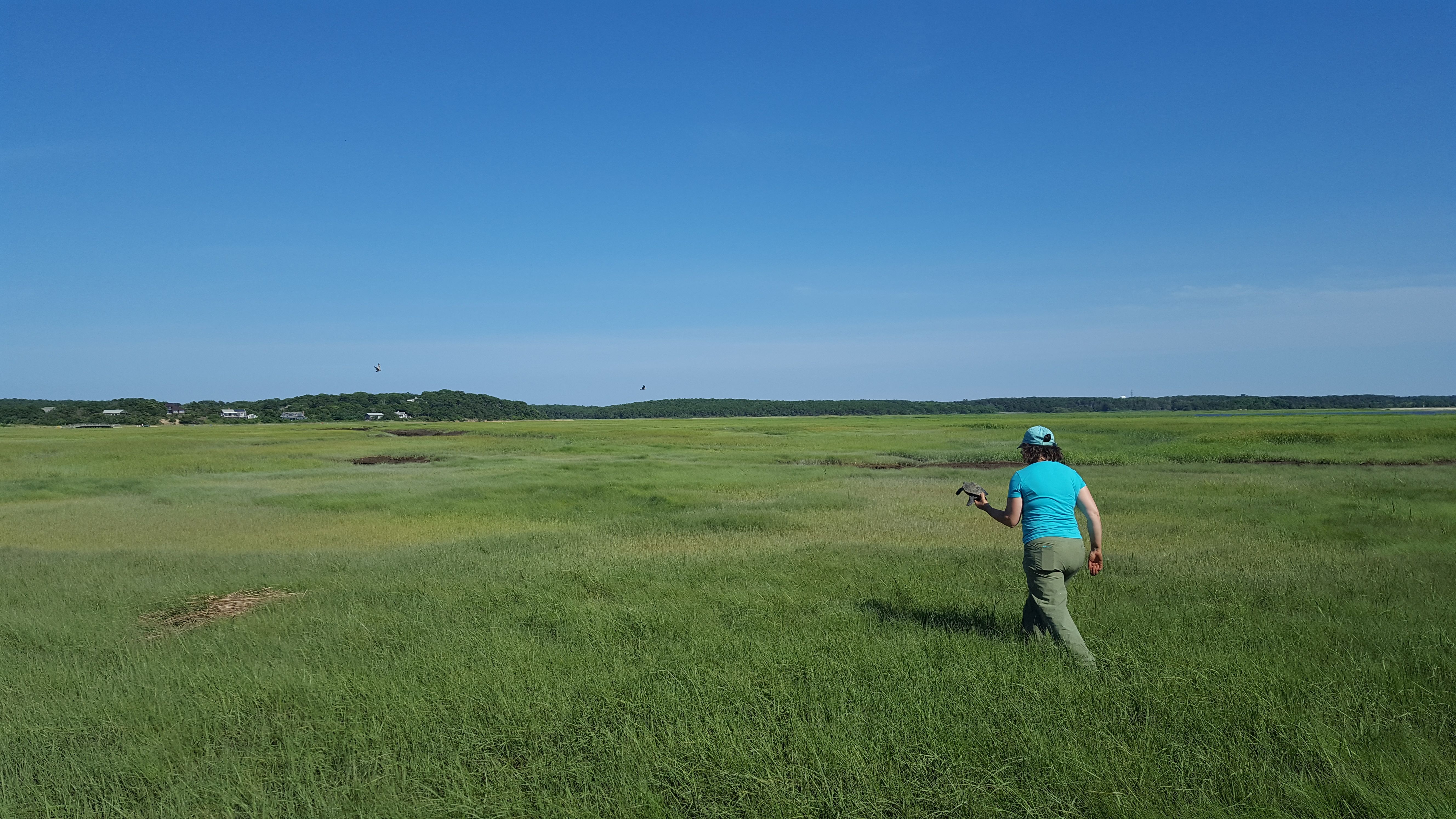 This post was contributed by Olivia Bourque who has been a member of the turtle team at Wellfleet Bay for two years. She took over as team leader this past spring.