Linda C., a dedicated Drumlin Farm volunteer, reflects below on the history of maple sugaring in this guest post. 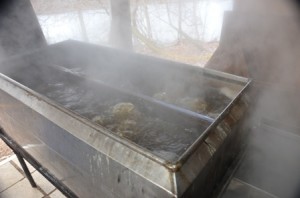 Maple sugaring season at Drumlin Farm is winding down. The sugaring season depends on cold nights below freezing and sunny days above freezing. Once the temperatures stop fluctuating in this range, the trees begin budding, the sap flavor changes, and it becomes unsuitable for boiling into syrup. As we are experiencing warmer nights these days, the sap production is slowing. 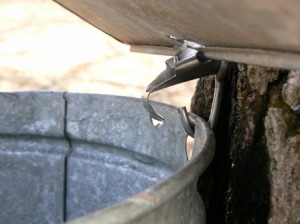 While there are many species of maple trees, the sugar, silver, and red maples of our region are the ones usually tapped because of their sugar content, around 2-4%. Once a maple is between 30-40 years old, about 12-inches in diameter, it can be tapped. A tree usually produces between 8-12 gallons of sap a season. When the season is over and the taps are removed, the holes seal themselves.

Sugaring is the first sign of the earth’s awakening in early spring and it is one of the few agricultural processes in North America that is not European in origin. Written accounts of sugaring date back several hundred years but its exact origins remain unknown.

According to an Abenaki legend, tribesmen would merely break off a branch and let the thick, sweet sap drip into their mouths. This made them fat and lazy, so the creator filled the trees with water, making the sap thin and only slightly sweet. To get the thick sweet syrup they so loved, they had to work for it by boiling the sap. They accomplished this by putting the sap and heated rocks in hollow tree trunks, replacing the rocks as necessary to keep the sap boiling. Because they had no way to preserve the syrup, the Abenaki’s would boil the sap to its sugar state. According to the legend, they learned to appreciate this gift of Mother Earth and not take it for granted.

Indigenous people taught the early settlers about the secret of maple trees. By the 1700’s, New Englanders were boiling sap in iron and copper kettles to make syrup and sugar. Sugaring was a way for farmers to earn extra income during the off-season. In the early 1800’s, the maple syrup industry advanced: metal spouts and cans replaced the wooden ones that were used to collect the sap, and the metal evaporator was developed to turn it into syrup.

In the 1970’s, advances in collecting and producing syrup occurred when plastic tubing systems were perfected. Gravity helps the sap run through the tubing directly from the tree to the sugarhouse, saving the labor-intensive task of emptying sap buckets on every tree, every day. Technology to remove some of the water from the sap in order to reduce boiling time has also advanced. Sap is boiled until it reaches 219 degrees Fahrenheit and is then called maple syrup. At this stage, the syrup is filtered to produce a clear amber product. About 40-60 gallons of sap is required to make one gallon of syrup. Once properly bottled for retail sales, maple syrup has a long shelf life, but it should be refrigerated once the bottle is opened.

At Drumlin Farm, we still hang covered metal buckets on metal spouts on our trees. This year we have started to use taps with a smaller diameter to ensure healthier trees. The sap is collected and then boiled down in our wood-fired evaporator located beside the Pond House. The sweet steam emitted by the lengthy boiling process perfumes the air at Drumlin Farm for weeks. 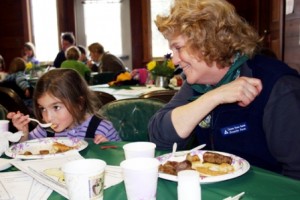 Last year, my grandson learned about the sugaring process, from tree-tapping to pancake-topping, at Drumlin Farm’s annual Farmer’s Pancake Breakfast. He was amazed that sap is more like water than syrup and got to sample the sap to have a firsthand taste of its faint sweetness. This year, the Farmer’s Pancake Breakfast is this Saturday and Sunday, March 16 and 17, from 9:00 am to 1:00 pm. While seats for this year’s Pancake Breakfast are sold out, Drumlin Farm will be open for regular admission during the event, and families are welcome to come learn about the sugaring process, purchase a bottle of Drumlin Farm’s own maple syrup (while supplies last), and visit our baby animals.