Bob Wilber, Director of Land Conservation
Connections, linkages, corridors, land bridges – these are all related and popular concepts in conservation science these days. With conserved lands, bigger is almost always much better – particularly when one is looking through the lens of climate change, where many plants and animals will need to move around a bit to sustain over the long term. By physically connecting one tract of existing conservation land with another, not only do both tracts become more significant, but the value of the whole is much greater than the sum of the parts.

Mass Audubon recently completed the acquisition of such a critical link – 82 acres of high quality forest land from Gregg S. Whitney, connecting our Whetstone Wood Wildlife Sanctuary with a portion of the Wendell State Forest to the west. We acquired this important property for $95,000 – a bargain sale $45,000 below current appraised value.

Whetstone is unique for several reasons, including the fact that it is both Mass Audubon’s largest 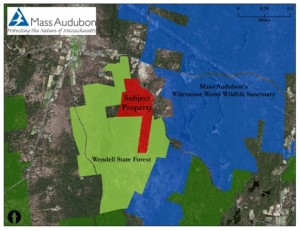 wildlife sanctuary, and the only one managed explicitly as a wildland – where human impact is minimized and the extent and function of natural communities are of paramount importance. Whetstone Wood is a terrific example of a wildland, consistent with the Wildlands and Woodlands forest conservation vision put forth by Harvard Forest and the University of Massachusetts. Whetstone Wood is also located within the multi-state Quabbin to Cardigan (Q2C) corridor conservation initiative. In addition, the land lies within an area designated by the state Executive Office of Energy and Environmental Affairs as the North Quabbin Bioreserve, further reflecting its ecological significance.

Making connections between conservation lands is one of the most prominent themes underpinning the Sanctuary Land Conservation Plan for Whetstone, located in the north Quabbin region of the state. Under that plan, we have been working hard to link that sanctuary with two of the largest expanses of protected open space in the state – more than 50,000 acres surrounding the Quabbin Reservoir and its watershed to the south, and the nearly 80,000 acres of land protected by private land trusts and by state conservation agencies to the north and west as well as extending further westward to Mt. Toby and the Connecticut River corridor. The “land bridge” context of Whetstone will be particularly important in the years ahead, as the impacts of climate change become more pronounced. By connecting these lands where possible today, they will be more resilient tomorrow – a critical factor in natural communities adapting to climate change.