Along Loring Hill Road, 23 acres of field and forest has been permanently protected with a Conservation Restriction (CR) donated to Mass Audubon by the Sinclair family.

It is one of the last steps in a project envisioned by Fraser Sinclair in 2014.  His neighbor George Butterworth (a former Mass Audubon trustee) passed away that year and the heirs were hoping to sell the land for conservation – over 200 acres.

A Plan to Protect 200 Acres

Sinclair quickly put in motion a preservation plan that ultimately called for:

Now all but the Harvard Forest purchase has been completed, and that is expected to happen within the next two years.  In the end, this addition of protected lands will further promote a healthy environment for a wide variety of plants and animals, as well as humans.

This 23-acre CR donated by the Sinclair family strengthens the connection between Rutland Brook Wildlife Sanctuary, neighboring Harvard Forest and the Swift River Reservation, and protects the Quabbin Reservoir which provides drinking water to over 2.5 million people.

You can visit Rutland Brook Wildlife Sanctuary and enjoy hiking, bird-watching, and nature study.  While there take a moment to appreciate the scenic landscapes and watersheds this 23-acre CR protects and the donors who made it happen.

Even on a hot day in a dry summer, beaver ponds remain a wet and bustling oasis for wildlife.  Mass Audubon has many beaver ponds within its sanctuary network, and we may have another one soon. We anticipate adding roughly 86 acres to Rutland Brook Wildlife Sanctuary in central Massachusetts within the next year or so. This pristine patch of woodland has many desirable natural features. However, the beaver pond on it may be the most valuable.

Beavers build dams to flood sections of forest using mud, sticks and small trees. This creates a watery safe zone from predators and habitat for the aquatic plants that make up a large part of their diet. In the process, they also build habitat for a variety of other species. 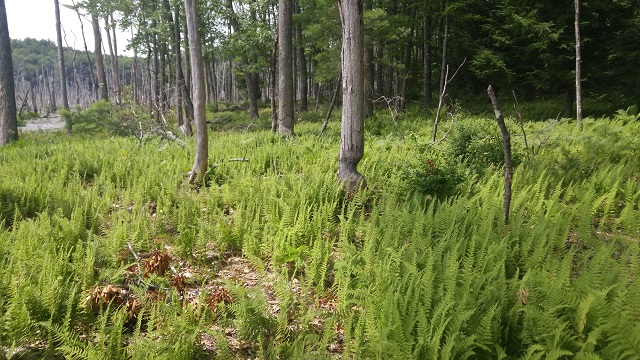 On my visit to this beaver pond last week, the air filled with the chatter of tree swallows, quacking of ducks and the buzzing of dragonflies. Along the banks I found numerous trees gnawed at their base—a sign of a healthy and industrious beaver colony.  I couldn’t help but admire their handiwork. 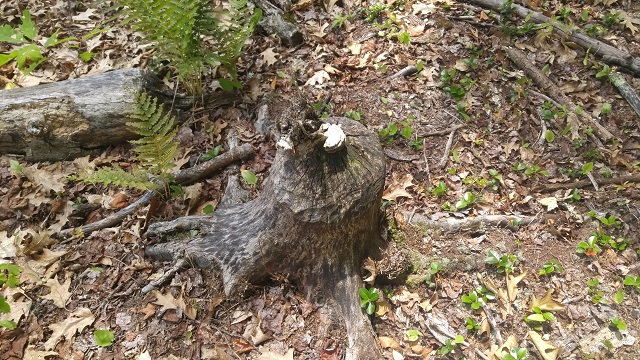 Readers of Gaining Ground may recall our entry about the Patterson property in Barre (Thickening Around the Middle, August 2011).  That opportunity—to protect 50 critical acres surrounded on three sides by our Rutland Brook Wildlife Sanctuary—is at hand.
Agreement with the family has been reached, “due diligence” (title, appraisal and environmental investigations) are complete, and of the total cost of $167,000 to acquire and care for the property, commitments totaling $123,000 are in hand.  The latter come thanks to a Conservation Partnership grant from the Commonwealth and a generous $45,000 contribution from a private foundation, the good news of which arrived in the last couple of months.

If we succeed in raising the final $44,000 needed, this wonderful mix of pine/oak/hemlock uplands interspersed with swamp and marsh wetlands will be permanently protected and added to the sanctuary.  The property drains to Osgood Swamp, the magnificent swamp/marsh/fen that dominates the southern part of the sanctuary.

With the aid of a $15,000 challenge grant that will double every contribution received, we are now in search of conservation-minded individuals who understand the importance of protecting large swaths of our natural areas and habitats. Click here to help us protect these important 50 acres. 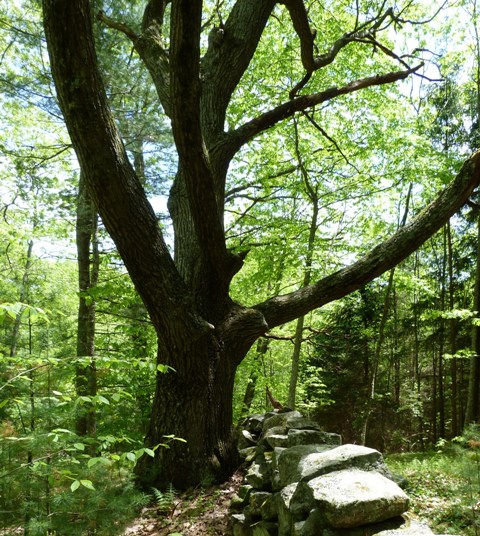 Who among us (of which yours truly is surely one) hasn’t run across an old pair of jeans at the back of the closet and thought “I used to fit into those?!?!” That extra inch or two (or three) around the middle seems as inevitable as the relentless march of time itself.

Today I rise whole-heartedly in praise of “thickening around the middle”, at least as far as land conservation is concerned. Out at Mass Audubon’s gem of a property in Barre and Petersham known as Rutland Brook Wildlife Sanctuary, some much hoped for thickening is lining up to take shape. At 1,874 acres the sanctuary is one of Mass Audubon’s largest, and one of its many virtues is that it contains large blocks of unbroken habitat, which the ecologists tell us are particularly valuable in maximizing the diversity of species that a particular refuge can support.

But Rutland Brook has a narrow waist, leaving it vulnerable to development pressure from its edges. We now have an opportunity to thicken its waist, thanks to the conservation commitment of the family of the late Harold and Hazel Patterson. When Mrs. Patterson passed away last fall, two of her children expressed interest to our friends at the East Quabbin Land Trust in selling the property for conservation, and the land trust put them in touch with us. With assistance from an appraiser and surveyor, we have now reached agreement with the family on the purchase of approximately 50 acres on the east side of the sanctuary’s “waist”.

The property has much to recommend it.  Its topography ranges from steep, boulder-strewn slopes, through gently rolling terrain, to level flats.  The forested uplands are a mix of white pine, red maple, red oak, and eastern hemlock. Wetlands in the valleys include a hemlock/yellow birch swamp, another dominated by red maple, an abandoned beaver meadow, and small areas of shrub swamp that may provide breeding habitat for vernal pool-associated amphibians. The property drains to nearby Osgood Swamp, the magnificent swamp/marsh/fen that dominates the southern part of the sanctuary.

We are currently working our way through title and other so-called “due diligence” items and plotting funding strategies, with hopes that we can add this wonderful land to the sanctuary sometime this winter or spring. Stay tuned. 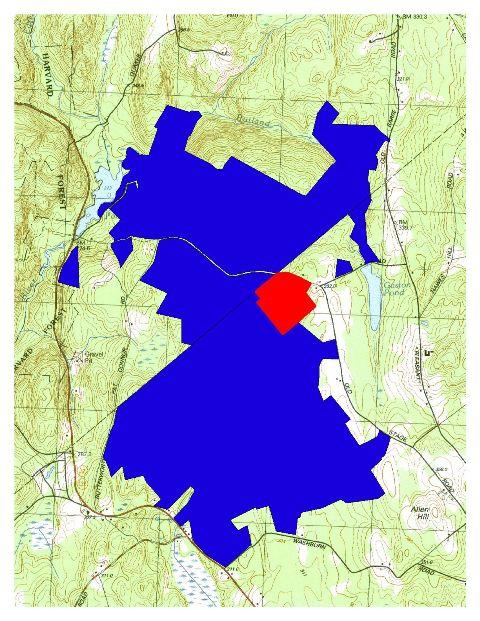 Above map shows Rutland Brook Wildlife Sanctuary blue and the land to be added in red. 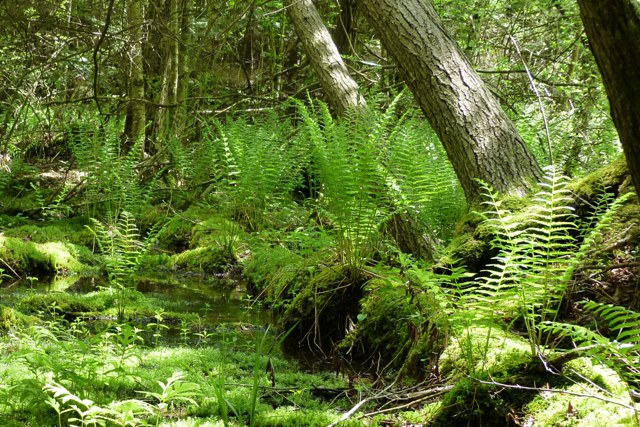 Above photo taken on the Patterson land, which will be added to Rutland Brook Wildlife Sanctuary