On June 30, 2020 Mass Audubon acquired two new properties on Cuttyhunk Island totaling over 30 acres and containing roughly 1.25 miles of coastline. This is the final stage of a multiyear endeavor to complete the acquisition of land left to Mass Audubon by bequest of our longtime conservation partner on the island, Muriel Ponzecchi.

For those unfamiliar with Cuttyhunk, it is the last and smallest of the Elizabeth Island chain just northwest of Martha’s Vineyard.  The island is about two miles from end to end.   There is a small, picturesque community (Gosnold, MA) comprised of mostly summer residents, but the vast majority of the island is still undeveloped.

The first and larger of the properties is known locally as Copicut Neck.  This section of coastline is one of the first bits of land that all visitors to the island see when they come in on the ferry.

According to Kathy Parsons, Director of Mass Audubon’s Coastal Waterbirds Program, “Copicut Neck is an important location on Cuttyhunk for nesting American Oystercatchers, Willets and other coastal birds.  As a relatively long and remote peninsula, it offers great habitat for some of the most vulnerable birds using the coast.”

Its protection also helps mitigate the impacts of flooding from coastal storms. The peninsula remains a beloved spot locally to take strolls along the shore and hardly see another person—a rare thing in Massachusetts!

The second property may be only 3.75 acres, but it is located at one of the highest points on the island, with one of the best panoramic views in Buzzards Bay.

The property gets its name from four World War II military pillboxes that remain on the site and were intended to provide vantage points from which to spot German submarines.  The army has long since abandoned them, but the Cuttyhunk community, coordinating with Mass Audubon, has stepped up to take on the responsibility of stewarding the restoration of those pieces of island history in the coming years.

A Leader of Cuttyhunk Conservation

It is not possible to write about the protection of these wonderful properties without writing about Muriel “Oriole” Ponzecchi—she’s the one who made it all possible!

Mass Audubon is extremely grateful to have worked with her collaboratively during her lifetime and to have received these generous bequests of land from her – reflecting her lifelong commitment to preserving what is so special about Cuttyhunk.

Muriel’s conservation vision with Mass Audubon began in 2001 when we acquired three Conservation Restrictions on the island from her.  After she passed away in late 2015, Mass Audubon received news of her bequest of Copicut Neck and Bunker Hill.

Those who knew her well say that Muriel cared deeply about the island and its natural lands, and informally made them open to islanders who wanted to visit.  Altogether, her bequests and donations to Mass Audubon amount to almost 50 acres of coastline, shrub forest, and grassland.

Thanks to Muriel, we can all continue visiting those special places that she loved and shared.

Our recent acquisition of the West End parcel on Cuttyhunk Island for conservation marked only one step in a much larger project on the tiny island at the end of Buzzards Bay.

Over the last several years, Mass Audubon has been doing the work necessary to accept the gift of several parcels on Cuttyhunk.  These pieces of land, scattered around the island, were all owned by Muriel “Oriel” Ponzecchi who passed away in late 2015.  Oriel, as she was known by her friends, generously left all these lands to Mass Audubon in her will.  We are very grateful to have the opportunity to help achieve her intended legacy of conservation.

Accepting gifts of land can be more time consuming than one might think.  There are many things to consider before taking on a property, especially on a place like Cuttyhunk with its long history of varied human uses including military, agriculture, and tourism.

Some twists and turns are expected.

That all aside, we have worked on some wonderful properties so far and there are more to come.  Next on the list is a high point on the island with one of the best views of Buzzards Bay that one could hope to find.

More trips to the island by this Mass Audubon Land Protection Specialist will likely be necessary, hopefully in summer, because fortunately someone has to do it!

On June 27, 2019 Mass Audubon received a two and a half acre property located on Cuttyhunk Island.

If you’re not familiar with Cuttyhunk, you are in good company. The island is a little known gem of coastal Massachusetts.  Specifically, it is the last and smallest of the Elizabeth Island chain just northwest of Martha’s Vineyard.  The island is about two miles from end to end.   There is a small, picturesque community (Gosnold, MA) comprised of mostly summer residents, but the vast majority of the island is still undeveloped.

This new Mass Audubon land sits at the very western tip of the island, hence we’ve been calling it “The West End”.

This little piece of land at the edge of the world is a lovely bit of sand, rock, and grass by the sea.  A perfect place to stare out at the ocean on a summer day.

It contains some of the highest bluffs on the island, and the shoreline offers a wonderful view of Martha’s Vineyard from a piece of rare coastal habitat.

This property is part of a generous bequest made by conservation-minded Muriel Ponzecchi to Mass Audubon in order to protect places on Cuttyhunk Island that she held so dear.  The West End parcel is actually phase two of the bequest. The first phase was a Conservation Restriction on roughly nine acres called “Bayberry Hill” which occurred in 2017.

We hope to conclude phase three in the coming year, so stay tuned for more land protection news from Cuttyhunk!

As the year of monitoring winds down and we frantically try to complete all our visits by year’s end, occasionally I’m caught totally off guard by the unexpected. And this year was no exception.

Being one who puts off the best for last, monitoring that is, I saved my visit to Gosnold until now.

Gosnold is a small town located on Cuttyhunk Island, at the end of the Elisabeth Islands, off the tail of Cape Cod. The island has less than 20 permanent residences and a school age population that currently  stands at two—brother and sister ages 8 & 6. Mail comes twice a week along with general supplies to the island, depending on the weather. Winters tend to be very long, cold, and a bit windy (to say the least).

In the summer months (July & August) the population quadruples with summer residents and that doesn’t count the many pleasure boats that visit, passing through on their way to the Cape & Islands.

My visit to Cuttyhunk earlier this week was beautiful, pleasant and cold. But let me back up…

Until age 3 or 4 I’m told I was a real believer in the jolly old man in the red suit, until one day when I discovered my parents wrapping a lump of coal…

Well, yesterday my belief was restored. Shortly after the ferry docked on Cuttyhunk, I was finishing a hot cup of coffee with the Captain & crew (after all it was quite cold, and none of us wanted to leave the warmth of the ship’s galley), when all of a sudden  there was quite a clatter on the upper deck! We all jumped  with wild expectations of what could possibly be going on. We rushed on deck thinking the ship was headed down! And who, to our surprise, was standing there on a pre-Christmas visit to the children of the Island?…. Old Saint Nick!

And I have the picture to prove he is real: 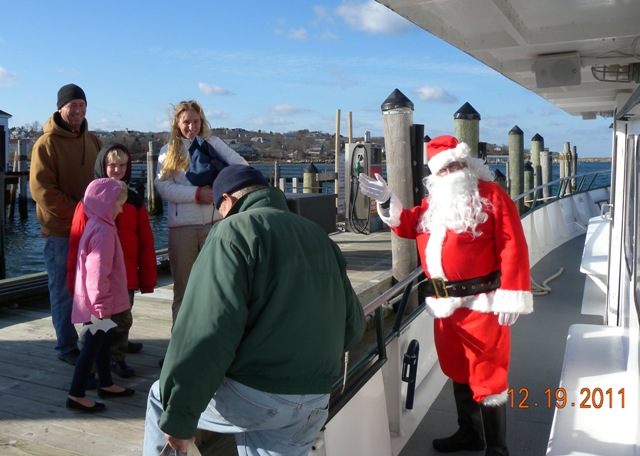 Photo of Santa making a special trip to see the Lynch Family on Cuttyhunk Island!