We’ve made big strides toward the permanent conservation of several private properties located on Great Neck in Wareham over the past week and a half.

Last week, Bob Wilber and I attended a meeting of the Wareham Conservation Commission and successfully obtained their signatures on a “municipal certificate” outlining the conservation values and public benefit that will be protected by the efforts of the Great Neck Conservation Partnership Initiative (a public/private partnership between Mass Audubon, the Wareham Land Trust, the Town of Wareham, and the state Department of Conservation & Recreation).  Unlike many states, Massachusetts requires that the local Conservation Commission officially endorse and sign a municipal certificate acknowledging the conservation values and public benefits protected by a conservation restriction (CR) prior to its recording.  The 300 acres fronting on Buzzards Bay to be protected has numerous conservation values including areas mapped as BioMap Supporting Natural Landscape and Estimated Habitat of Rare Wetland Wildlife by the Massachusetts Natural Heritage and Endangered Species Program, to name a few.

Then this past Tuesday, Bob and I returned to beautiful Wareham to meet with the Board of Selectman and got their approval of the same private Conservation Restrictions as required by Massachusetts law.  Obtaining municipal approval is what establishes the permanence of the CRs; without it they would expire in 30 years.  Next, the CRs will be submitted to the state Executive Office of Energy and Environmental Affairs for their final sign-off!

Take a look at the map below – the pending conservation restrictions will protect all of the land shown in orange.  The land shown in blue, purple and green has already been permanently protected. 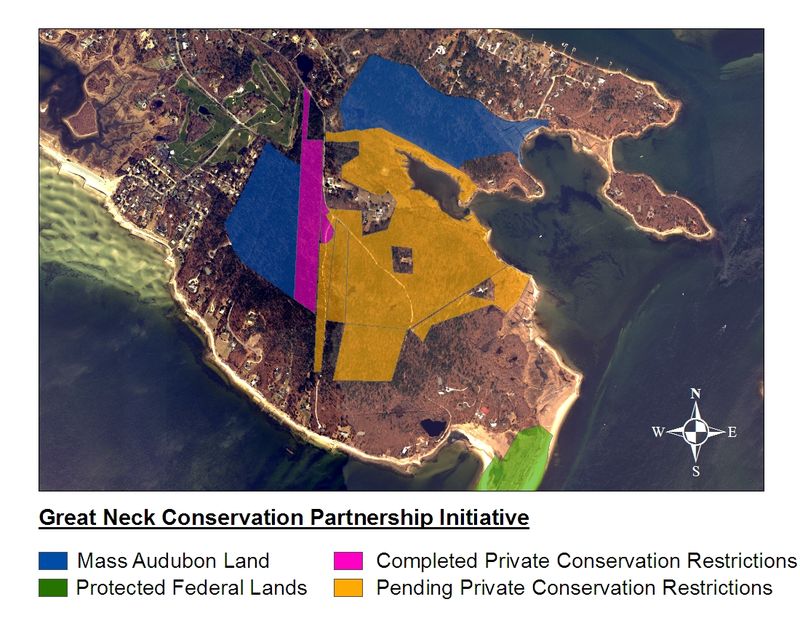 With every conservation restriction (CR) we accept, Mass Audubon must document, photograph, and map the restriction boundaries to ensure the long term protection of the property’s conservation values and environmental resources.  This information is compiled into what we call a “Baseline Documentation Report” for each CR property.

Recently, I visited Sacred Hearts Healing Center in Wareham, Massachusetts which is at the center of a public and private conservation partnership to preserve approximately 300 beautiful acres on Great Neck fronting on Buzzards Bay – possibly the last largest assembly of conservation land to be protected in this area. The conservation partnership includes Mass Audubon, the state Department of Conservation and Recreation, the Town of Wareham, Wareham Land Trust, and numerous private property owners who have dedicated their land to conservation.

Here is John Coolidge, our Stewardship Specialist, using a GPS device to locate concrete property boundary markers as part of creating the Baseline Documentation Report for the Sacred Hearts CR. Look for more information to follow about the opening of a new trail for you to enjoy on this spectacular property. 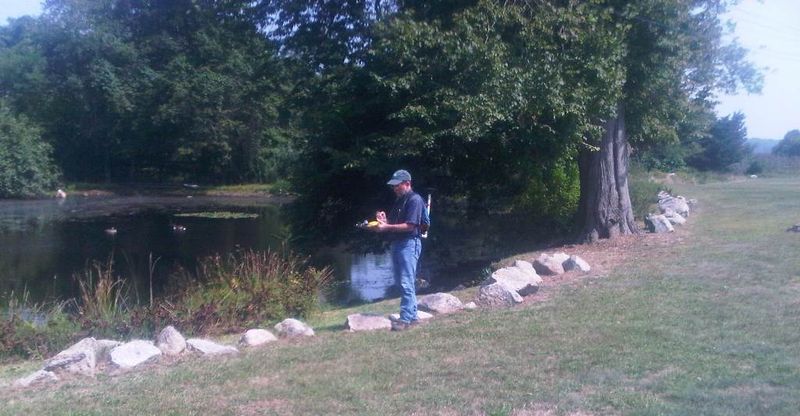 There’s a fair amount of tricky lingo that gets thrown around the conservation world. One of the confusing terms frequently used is “conservation restriction” (or “conservation easement” as is used everywhere else in the country outside the Commonwealth). In a nutshell, a conservation restriction (CR) is a tool to provide permanent protection of land while allowing that land to remain in private ownership. Land Protection Director Bob Wilber recently wrote a message to the readers of our e-newsletter, Land—For People and Wildlife, spelling out a more detailed explanation (click here) of a CR in layman’s terms. So for those of you who are still thinking “but what IS a conservation restriction??” – you’ll probably find Bob's note to be a more satisfactory response than the nutshell version above. And if you’re not yet receiving our e-newsletter, please visit our website and sign up by entering your name and email address in the column on the left.